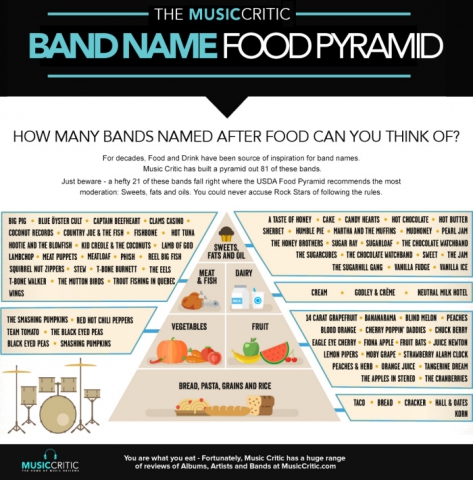 Music Critic was founded in 1998, and publishes album reviews, music articles, concert and live band reviews and instrument guides. The new infographic is a compilation of the names of 81 bands that went for a food theme, displayed in the form of the old USDA food pyramid.

“The Music-Critic website has a tremendous history, and has grown to become a leading source of music, band and album reviews over the past almost 20 years,” said Music Critic’s Editor Matt Aird. “When we were making this infographic, we decided to do something that might be a little fun for our readers to enjoy. We sat down and came up with a list of as many food related band names as we could think of, and then turned them into a play on the United States Department of Agriculture’s famous old food pyramid.”

The 81 bands are divided into the same groupings that the Food Pyramid used, such as Korn for Bread, Pasta Grains and Rice, Blind Melon for Fruit, The Smashing Pumpkins for Vegetables, Cream for Dairy, Lamb of God for Meat and Fish and Cake for Sweets and Oil.

The first chart suggested to the USDA by nutritional experts in 1992 featured fruits and vegetables as the biggest group. This chart was overturned at the hand of special interests in the grain, meat, and dairy industries as they were concerned that if Americans followed the chart suggested, they would buy much less meat, milk, and bread. When the revised chart was released, it “could lead to an epidemic of obesity and diabetes,” the original composer of the food Pyramid, Luise Light warned.

“Fortunately, all of the bands we recommend produce music that is entirely fat-free, and there’s enough dance rhythm in them to help burn off more than a few calories,” continued Matt Aird for Music Critic.

Founded as an online music review site, with reviews written for the people, by the people, Music Critic includes thousands of Album reviews across a wide range of genres, all the way from the popular Rock, Rap, Indie and Pop categories to Blues, World Music, Electronic and Reggae. Other popular sections include reviews of individual Concerts and live performances, equipment, soundtracks, instruments and movie themes.