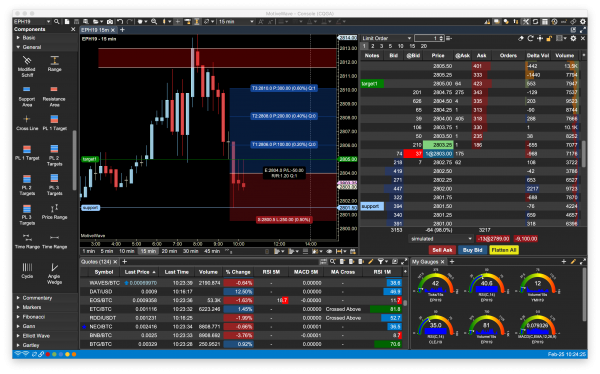 Kelowna, BC – May 30, 2019 – MotiveWave Software, a Kelowna-based developer of easy-to-use high-performance charting and trading software, has been busy this year adding many new features to its already full-featured charting and trading platform. MotiveWave now includes Cloud Workspaces, very advanced DOM functionality and enhancements, Custom Watchlists, a Profit Loss Calculator, Continuous Contracts, and many other new features and enhancements.

Here are just a few highlights of the latest features and enhancements to be added into MotiveWave for Version 6:

– More Depth Levels in DOM (Depth of Market) beyond the standard 10 — Users can see the full order book.

– DOM Position in Queue — User can see where their order is in the queue.

– Additional enhancements to the TPO Study and Volume Imprint Study.

– Cloud Workspaces — Workspaces can now be saved to the Cloud. Cloud workspaces are hosted on MotiveWave’s server and can be accessed from any computer using the same license key.

– DOM (Depth of Market) will now re-center automatically based on a user defined amount of ticks that it’s trading away from the center point.

– Many Additional columns within the DOM including Notes, Delta Volume, Bid and Ask Volume.

– Watch List Flags and Filtering — A flag can be displayed in a Watch List (or Quote Sheet) to highlight important or notable instruments, and the symbol list can be filtered based on those flags.

– Gauges — Used to visually display statistics or study values in a panel in the Console or Desktops.

“MotiveWave Version 6.0 is proving to be one of our biggest major releases yet and it is an exciting step forward in the evolution of our software”, said Tony Lindsay, Founder of MotiveWave Software, “With Version 6.0, we’ve made some necessary and huge improvements to our DOM, as well as packing in a large number of other enhancements. We now believe we are the best trading software that you’ve never heard of, and we plan on changing that soon too. We’ve shown that we continually keep improving the product based on what’s best for the user experience and what’s best for the software itself. We still have no intention of slowing down.”

MotiveWave is a full-featured trading platform that provides advanced charting and market analysis tools, and is available for Windows and Mac OS X. MotiveWave is available in a few different editions with additional Add On Modules, designed to meet individual trading needs, experience and budget. MotiveWave can be used to trade any securities that your broker or data service supports. These may include stocks, futures, options, equities, cryptocurrencies and forex.

For more information about MotiveWave, or for a 14 day risk-free trial, please visit: https://www.motivewave.com.

Founded in 2010, MotiveWave Software is a developer of easy-to-use high-performance charting and trading software for the individual active trader. Built with the individual trader in mind, the company’s full-featured trading platform, MotiveWave, provides advanced charting, market analysis, strategy creation and back testing that enables traders to easily execute their trading decisions accurately and efficiently through its intuitive charts, trading screens and order management capabilities. Based in Kelowna, BC, MotiveWave Software is continually invested in product development to make MotiveWave the best trading software available.