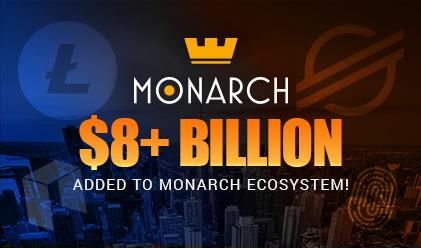 Monarch, one of the most feature-packed decentralized cryptocurrency wallets and suite of crypto services, has pushed out updates to their Monarch Wallet on iOS and Android. They have added support for three of the top 20 cryptocurrencies in the world, Litecoin, NEO and Stellar; bringing a combined market cap of more than $8 billion to the Monarch ecosystem. Monarch’s Android update also brings Biometric fingerprint support, a feature which many have asked for to enhance the level of security provided with the app.

Monarch brings together some of the best blockchain services under one app with functionality across iOS, Android, Windows Desktop, and Mac OS, providing a one-stop-shop for more than 300,000 users and growing. With the inclusion of LTC, NEO and Stellar support in their wallets, their wallet now supports more than 3,003 cryptocurrencies, making it one of the most advanced wallets currently available.

“Users will now be able to not only store, send and receive NEO inside their iOS wallets, but they can also receive GAS,” said Robert Beadles, President of Monarch. “We’re excited to welcome the NEO community to the Monarch ecosystem, and look forward to adding support for more cryptocurrencies as we continue developing and expanding our decentralized wallet and suite of services.”

You can learn more about Monarch by visiting their website or connecting with them on their live chat telegram channel here: https://t.me/MonarchToken

Monarch offers mobile and desktop apps, a decentralized wallet and exchange, a portfolio tracker, and universal KYC integration. The Monarch Wallet now supports more than 3,003 cryptocurrencies. It allows qualified users to buy cryptocurrency with a bank or credit card, switch between hot and cold wallets, all while maintaining their own private keys and seed. Their team of advisors includes Roger Ver, Bitcoin Foundation Founder; Eric Ly, Co-Founder of LinkedIn; David Zimbeck, lead developer at BitBay and creator of the first smart contract; Damon Nam, Founder of Coin, and many of the most influential names in the blockchain industry.