KHABIB NURMAGOMEDOV'S rise to becoming the best MMA fighter on the planet. Highlights from Khabib vs Mcgregor, Khabib vs Trujillo and Khabib vs Ali Oleg Bagov 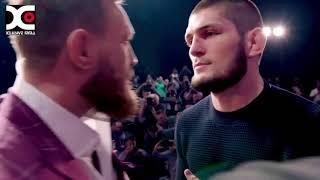 Khabib is one of the hotest fighters in the MMA circut holding the UFC’s light weight championship title he is set to battle Tony Ferguson this April. Khabib’s ride tot he top has been unusual and here are a few of his fight highlights that you may have overlooked.

Perhaps its Conor McGregor and Khabib scuffle that has launched his career into the stratasphere. These two have met in the cage after the incident with Conor throwing a dolly throught the window of Khabib’s bus. Many thought it was the end of Conor’s career in the UFC. But with Conor recently being reactivated and winning against Cowby Cerone it is possible that a REMATCH between Khabib Nurmagomedov and Conor McGregor could happen.

Conor McGregor received a text message from the reigning team of the UFC, Khabib Nurmagomedov. Khabib’s manager Ali Abdelaziz has revealed that “McGregor needs to earn it.” McGregor is serious about wanting to redeem himself after his controversial fight against Nurmagomedov. MCGREGOR deliberately attack Khabib by saying nasty comments about Nurmagomedov, his wife, his family, his father – Conor was rude and unprofessional!

For a full view of all the nasty McGregor trash-talking antics against Khabib, watch this video: https://youtu.be/7Capohjh5O0

The Redemption would not come very easy for Conor McGregor. He has to earn his way with a win streak before he can face the EAGLE.

2. Khabib’s Head is made of Steel.

Khabib HEADBUTTS Ali Bagov to WIN 8-0 ! at the Golden Fist Russia in Moscow.

Khabib Nurmagomedov vs. Ali Oleg Bagov fight was one of a kind. The grappling Master is known to unleash brutal headbutts when they were still legal in Russia.

Khabib used headbutt to advance his points against Ali Bagov at the Golden Fist Russia event in Moscow. He uses his usual GRAPPLING technique to bring Ali Bagov on the floor, before using his HEAD like a battering ram. Khabib won via Unanimous Decision.

3. Khabib’s MOST BRUTAL DISPLAY OF RUTHLESSNESS.

Each Fight of Khabib displayed a different level and different side of his skills. You name it, mauling of Edson Barboza, his beatdown of Michael Johnson, or his domination of Conor McGregor, it is all Khabib’s SIGNATURE style.

The fight with Abel Trujillo is unforgettable. “This is a GRAPPLING CLINIC,” as described by Joe Rogan, commentating at that time. Khabib took down Trujillo not only PHYSICALLY BUT MENTALLY. All Trujilo could do was wave his arms and look helpless in front of the referee. Khabib made history for the most takedowns at 21 in a single fight.

This fight displayed the Russian’s ruthless side, and in watching the bout again, you can almost detect, especially in the latter stages of each round, where Khabib’s showmanship resulted in some genuinely fantastic throws.

A twisted playfulness in a way in which Khabib repeatedly grounded his helpless opponent, REPEATEDLY LIKE ITS A GAME. The world is excited for Khabib’s upcoming fight against Tony Furguson. Will this be another highlight in his career of will the Eagle meet the end of his undefeated record? The world will tune into watch as one of the greatest fighters once again goes to battle in the Cage.