MentorBox Features Denise Brosseau As The Expert in Thought Leadership

MentorBox announces Denise as a featured author and expert in thought leadership. Brosseau is the author of “Ready to Be a Thought Leader? How to Increase Your Influence, Impact, and Success." 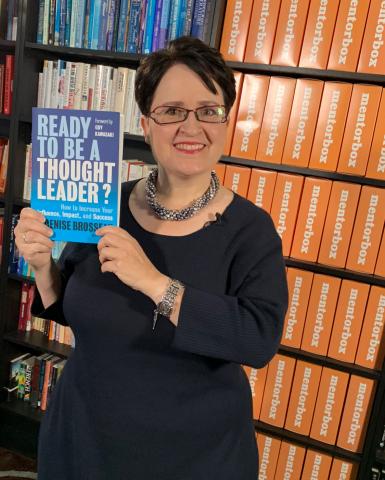 San Francisco, CA – MentorBox is thrilled to announce that Denise Brosseau is a featured expert in the recent MentorBox release in their monthly subscription for CEOs, executives and entrepreneurs. Denise Brosseau is joining the lineup of featured authors at MentorBox, a platform providing leaders across the world with access to books, exclusive tutorials and other resources from a select group of authors and global leaders, curates information to help them be more successful in their business and their life.

Brosseau, a world-renowned expert in thought leadership, is the author of “Ready to Be a Thought Leader? How to Increase Your Influence, Impact, and Success.” The book outlines a seven-step plan for becoming a thought leader. Brosseau also is the founder and CEO of Thought Leadership Lab, teaching business professionals and civic leaders how to inspire and influence others for far-reaching impact. Attendees are coached on making their ideas heard, bringing innovations to life and delivering concrete, replicable results.

Thought leadership, Brosseau said, is the best career insurance around: “What’s going to happen in your future career is that something is going to change. There’s going to be a merger or an acquisition. Your party is going to be out of power, or your boss is going to leave. As a thought leader, you are protected from possible bad outcomes because you are the go-to person in your field of expertise.”

Brosseau inspires executives and entrepreneurs to prepare for change, share their ideas with boldness, build a network of support and create opportunities rather than waiting for opportunities to arise.

In making the MentorBox announcement, founder and CEO Alex Mehr said, “We’re delighted to have Denise as a featured author. Her book is an essential read for executives and entrepreneurs who want to expand their influence. It’s destined to become another highly-valued resource in the ever-expanding MentorBox library.”

Brosseau began her career in technology. She later co-founded the Forum for Women Entrepreneurs, a trade association, as well as Springboard Enterprises, the first venture capital conference for women. Over the last 18 years, Springboard has helped women-led and founded companies raise approximately $8.7 billion in capital. Kay Koplovitz, founder of USA Network and co-founder of Springboard, has called Brosseau “a champion of entrepreneurs and corporate executives alike.”

Brosseau also is a popular keynote speaker who has addressed tens of thousands of people around the world. She is frequently a guest speaker at iconic companies like Microsoft and PayPal. She is currently an adjunct professor at Stanford Graduate School of Business, and she has guest-lectured at a number of other prestigious universities.

Brosseau’s numerous awards include Champion of Change, bestowed by the White House. The Girl Scouts of America honored her with the Forever Green Award, and she was named among the Top 100 Women of Influence by the Silicon Valley Business Journal. She also was one of Watermark’s Six Women Who Have Made Their Mark.

MentorBox is a monthly subscription-based platform for business owners from various industries to receive books, exclusive video lessons, audio programs, workbooks, special access to never-before-seen workshops and summary sheets along with customized videos about the topic. The membership provides a new way of learning in a fun and engaging way directly from the highest level of authors and global leaders and is meant to immediately improve the financial and social life of people in business.

To learn more about MentorBox or to become a member of MentorBox, visit https://www.mentorbox.com