Menopause & perimenopause symptoms for women over the age of 40 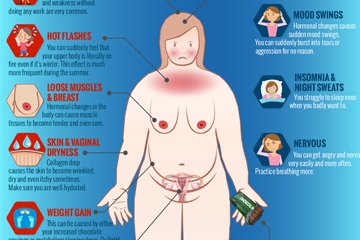 Common symptoms to be aware of for all women out there

Menopause is something which is regarded as an inevitable part of a woman’s life. While there might be certain ways that they would be able to prolong it, it is bound to come sooner or later. Once that happens, it will be best that women all over the world will be prepared for it. Armed with all the necessary knowledge, they will not only be able to welcome it with open arms, but also tackle it as the years go by.

It is because of this reason that On Demand Healthy, a reliable source of health information, has created a list of some of all menopausal signs (including the common and the rare ones). And contrary to all the stories that are circulated over the internet, menopause does not necessarily have to be a nightmare.

In terms of psychological symptoms, mood swings have been found to be the most common. This is referred to the emotional reaction that would be considered inappropriate to its cause or trigger. A major source of this could be imbalances in the hormone system. Women going through this phase would also suffer from lack of motivation, depression, irritability, and anxiety. In order to overcome these, it would be suggested that women would always surround themselves with company so that they would never feel alone. Joining a fitness class or the local gym might also seem to help. While prescription medicine might be helpful to some extent, the consequences would need to be taken in to account as well.

Where cognitive symptoms are concerned, the hormonal imbalances would bring about a change in the way women would continue with their daily routine. In terms of the most common symptoms, these would be difficulty concentrating and memory lapses. No matter how much women would try to focus their mind in to getting the task at hand done, they would not be able to do that. In cases of memory lapses, they would find themselves to be frustrated, not being able to remember what they were up to.

Since menopause is being discussed, most women are concerned about the sexual symptoms. Here, it would not be a surprise to find that loss of libido has been found to be the most common symptom. This has also been found to be the most difficult symptom to cope up with since women would not know what led to the loss of sexual desire in the first place. amongst others, it would include chronic disease, vaginal dryness, and painful sex. This would usually happen when the vaginal tissue would become drier and thinner. As a result, this would also contribute further to the loss of libido, thus being a compound effect.

Thus, these would be the full list of the menopause and perimenopuase symptoms gathered from different researches and studies. To know more about all the different types of symptoms, click the link below