An experienced money mentor has launched a program to teach people how to create additional revenue streams as Tai Lopez explains there are three commandments wealthy people follow. 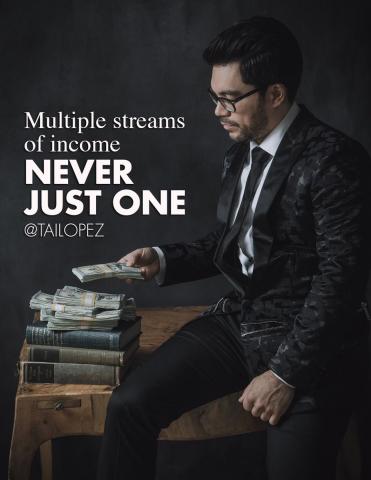 An experienced online marketer and money mentor has launched a new partnership program and formula to create multiple revenue streams. Tai Lopez’s Cashflow Program is open to new and existing marketers who have ambitious goals and want to earn a regular passive income from the comfort of their home or anywhere in the world.

The newly launched partnership program developed by Tai Lopez asks people to consider how much they can increase their monthly income by and how they might do this. He explains that he has created a ten-step formula to help people increase their revenue streams, wealth, and long-term financial security.

Tai Lopez provides background to his success and how he became an entrepreneur and learned from millionaire and billionaire mentors. He says there are many steps people can take to increase their wealth, but there are three key commandments financially successful people follow. Firstly, people must have more than one stream of income, ideally three. He cites research that says 60-70% of self-made millionaires have at least three streams of income.

Secondly, he says people should ideally invest their money in new trends as many successful tycoons and entrepreneurs are also known as early adopters and have invested in new and emerging technologies. Tai Lopez explains this is not a new trend, but something successful business owners have been doing for years.

The third step says that people should make their money work for them by having the right connections. Hyper successful individuals and wealthy business people are connected to the right people either through family connections or employment. Unfortunately, Tai Lopez explains society is not created with these three commandments in mind, which is why 1% of the population have access to most of the money in the world while 99% struggle financially.

A spokesperson said: “This new hack or cut and paste formula from Tai Lopez can help you generate long-term stability, wealth, and financial success. He aims to save you 10 years of financial hardship and setbacks by simply following the three commandments outlined. He now has approximately 18 streams of income so while he is not at the Warren Buffett level, he is better off than when he started with nothing.”

To find out more, interested parties are invited to visit the link provided.