Janson Mancheski's chilling crime thriller novel, Mask of Bone, book 3 in The Chemist Series, relaunches May 7th, 2019, for only $0.99 on www.Amazon.com. 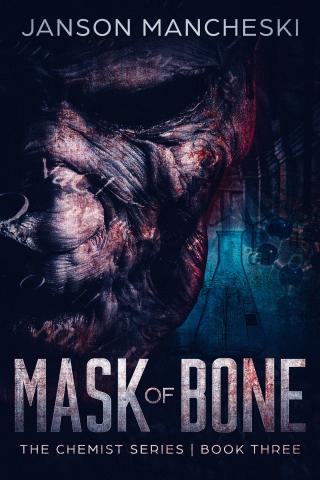 “[In Mask of Bone] Janson Mancheski seduces his audience into the world of human trafficking thru the eyes of Green Bay investigator Cale Van Waring. A classic.” -Mlen, Amazon Reviewer

Janson Mancheski’s crime thriller novel, Mask of Bone, book 3 in The Chemist Series, relaunches on Amazon on May 7th for only $0.99. Book 1 of the series is The Chemist and book 2 is Trail of Evil. Though the books can be read as standalone novels or in any order, it is highly recommended to read them in order for the best reading experience.

Green Bay investigator Cale Van Waring awakens in Italy, having survived yet another attempt on his life. He has little time to dwell on it, however, for the pair of missing victims he’s been searching for has been located. They are in the hands of a human trafficking ring, and a hasty rescue mission is in the works.

To add to his stress, the kidnapper who started the entire case—Tobias Crenshaw, a.k.a. the Chemist—is being released from the county jail. Yet before he can begin to taunt the city again at his press conference, the sociopath is assassinated on the steps of the county courthouse. All well and good for Cale, except for small problem: his fiancé, Maggie, is a suspect in the shooting.Despite being four thousand miles away, Cale learns through his partner that Maggie is pregnant. And the odds are high that the man who kidnapped and raped her is the father—not Cale. Once his rescue mission is complete, he must fly home to deal with this complicated situation.With his rescue mission in jeopardy, and his pregnant fiancé suspected of murder, Cale wonders how things can get much worse. Yet the sadistic leader of the trafficking ring—Colonel Mabutu, the man who failed to end Cale’s life in three prior attempts—vows he won’t miss the fourth time. He informs Cale that he is coming after him, as well as the rest of his family. And the colonel has good reason to feel confident. As a master of African voodoo, he has yet to be defeated when wearing his mask of human bone.

“The Chemist is a thriller about an elusive serial killer. He is given an apropos nickname by reporters, the Nowhere Man, referring to the fact he has eluded law enforcement for years. Cale Van Waring is the lead homicide detective assigned to solving the missing and murdered women’s cases. He works with two partners in crime, Slink and Staszak, who are his close buddies. Mancheski develops these relationships in wonderful detail. The subject matter is made sustainable by the beautifully written words of Mancheski. He has mastered language in a way that must be appreciated. His use of vocabulary and metaphors alone is amazing in a story of this nature.” -Mary Crocco, Amazon Reviewer

“Absolutely captivated by this book! Wrapping it all together from The Chemist and Trail of Evil in a brilliant page turner was no easy task! But Mancheski did it. Mask of Bone has outstanding internal character dialogue and is heart pounding exciting. GREAT read!! This trilogy is highly recommended!” -DMC, Amazon Reviewer

Mancheski’s The Chemist (first in The Chemist Series) captured first place for fiction in the Sharp Writ Book Awards in 2010. Voyage Media Productions has accepted his screenplay version of his book, and casting and production offers are currently being reviewed. The Chemist movie script was a top 16 semi-finalist in the 2018 Blue Cat Screenplay contest. And one of his other screenplays was a Writer’s Digest 2011 top 10 finalist, movie script category.

“Great thriller! Read the whole “The Chemist Trilogy”. What a winner! Each book in the trilogy is a page turner.” -Charly, Amazon Reviewer

Download Janson Mancheski’s jaw-dropping, heart-pounding free short story The Decoy at http://www.jansonmancheski.com where you can also watch the movie trailer for The Chemist, book 1 in the Chemist Series.