Dan Macphail Studio Completes Another Custom Antler Furniture Order With The Shipment To A Yellowstone Client Of A Moose Antler Cantilevered Canopy Bed. 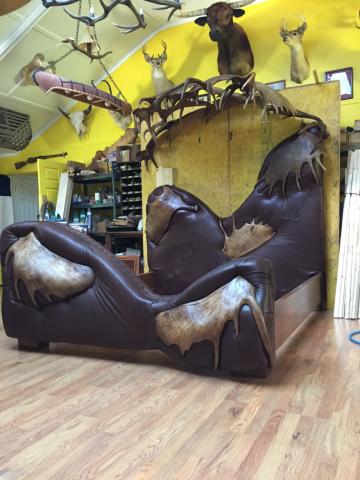 The Cantilevered Moose Canopy is a prime example of a custom order place by a client that owns a second home in Yellowstone National Park. This client had specific size and color requirements to fit the room and western décor of the stunningly western designed home.

This advanced level of detail and design explains the exclusivity and recognition MacPhail Studio has achieved both nationally and internationally. Dan MacPhail has earned design awards from the most prestigious western design organizations. MacPhail Studio Antler Art is on permanent display at the Smithsonian, European, and Western museums. Along with the museums, MacPhail Studio has been featured in Field & Stream, Kentucky Monthly and Discovery Channel, and PBS-TV. As the originator of the antler Christmas tree MacPhail holds a special standing in the design and artistic history.

“While the studio still has a wide demand for antler lighting designs, the specialty of MacPhail Studio has become the exclusive one of a kind Antler Christmas Tree that have been shipped to International Destinations and Colorado and Utah Resort towns. “I take great pride in each exclusive one of a kind design and my clients come from all walks of life and from all over the U.S., even Norway and Sweden.” said Dan.

Dan MacPhail’s website offers consumers multiple ways to search for an antler chair, antler lighting or any antler creation and much more. “You can even find animal facts and antler and horn information not easily found on the internet. New pages provide detailed information on the custom creations offered by Dan MacPhail. In addition, there are complete visual stories of many of our custom designs as told by the Discovery Channel and KET Public Education TV” said Dan MacPhail.

Dan MacPhail comes from a fine art background having a background of painting and art restoration. This perspective gives a different and special inspiration to all of Dan’s artistic endeavors and plays into the studio art created with antlers. Dan’s custom antler designs are displayed internationally in Germany and Switzerland as well as US Western Design Museums and The Smithsonian.

In 1989 while working in Washington DC, Dan designed his first Texas Longhorn Chair and was hooked. So today he has become “Dan Dan The Antler Man, a craftsman who blends history with nature to create award winning and striking modern Antler Art.”

Kentucky Magazine wrote: “Imagine what a cool dude looks like and you can easily picture a cross between James Bond and Jimmy Buffett—part mysterious international gentleman, part beach bum. If Bond and Buffett had a nephew, his name would be Dan MacPhail.”