Former Champion Basketball player and legend, Marcus Timmons may be better known for his achievements in the NBL, but this giant of a man is now causing a stir at Coles supermarket in Eastland. 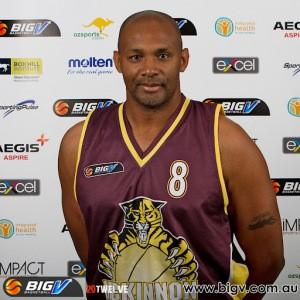 Former Champion Basketball player and legend, Marcus Timmons may be better known for his achievements in the National Basketball League in Australia, but this giant of a man is now causing a stir at Coles supermarket in Eastland.

American-born Marcus Timmons is a legend in basketball circles having had an illustrious career as a small forward and won championships with the Melbourne Tigers and Perth Wildcats. He is also a member of the SIU Saluki Hall of Fame.

So people may be wondering how (and more importantly) why, he has made the transition to security.

Following his retirement, Timmons pursued his love of the game by spending almost 20 years as a personal coaching specialist. Working in Melbourne he delivered basketball development initiatives and programs to encourage and support junior participation across all areas.

His role as a small forward in basketball proved his versatility to be able to do a little bit of everything on the court and this has been mirrored by a variety of part-time roles away from basketball, including Program Supervisor for Role models and the position of Lead Guard where he trained others in AWS operations.

He is now working with MA Services Group who are immensely proud to have him on board.

What does he bring to the table?

Well, by his own admission, “He has extensive experience in client relations and team management. He’s also able to communicate in a respectful manner which enables him to deflect conflict and calm situations before they get out of hand – the number one trait of a good security officer! He’s also worked in a variety of backgrounds and prides himself in being approachable by others.”

So when MA Services were approached by Coles supermarkets to provide assistance to the team at Eastland in both customer service and loss prevention, Marcus was the perfect fit and is proving popular both with the staff and the customers.

How is Customer Service and Loss Prevention Linked?

Historically, the relationship between sales and loss prevention programs have been viewed as if they were two different sides of a coin. But, it’s since been found that one of the best ways to combat thieves is by providing good customer service.

Marcus is currently teaching the team about awareness. He is showing them how to avoid and deter theft by being aware of everyone who walks into the store, acknowledging and greeting each and every customer as they enter.

By persistently putting themselves in front of their customers and being present on the shop floor, the Coles team are making thieves ‘run scared’ from their stores.

Marcus Timmons is an inspiration to many people, and he is viewed as an asset to the MA Services Group. If you’re interested to learn more about our customer service and loss prevention initiatives, then please contact MA Services Group on 1300 020 406.