MA Services Group, National Company Proud To Give Back To The Local Community

MA Services Group a fast-growing national services company with their head offices in Melbourne have recently attended their latest event in support of the Victoria Police Blue Ribbon Foundation. 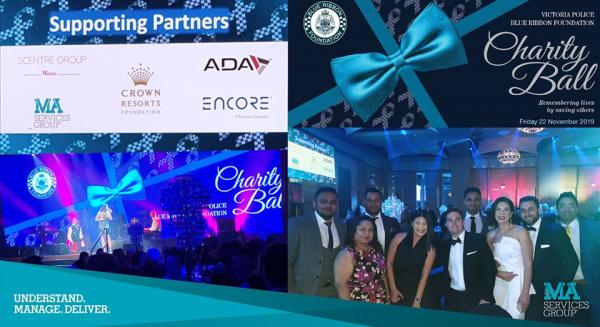 National Services company MA Services Group have established a growing reputation for giving back to the community. Using the hashtag #GivingBack they continue to show their support for local charities

MA Services Group a fast-growing national services company with their head offices in Melbourne have recently attended their latest event in support of the Victoria Police Blue Ribbon Foundation.

This is a charity set up to perpetuate the memory of Victoria Police Officers who have died in the call of duty through the support of worthwhile community projects. With over 1000 people in attendance, all proceeds raised during a charity ball went towards the upgrade of the women’s and children’s precinct at the Angliss Hospital in Ferntree Gully.

A spokesperson from MA Services group stated that

“We’re very proud to sponsor and support such a great event for such a worthwhile cause. It’s particularly important that we continue to remember those who died for the safety of others. What better way to remember them than through a project that in itself will serve to better enhance the lives of mothers and their newborn children.”

The Victoria Police Blue Ribbon Foundation is just one of a list of local charities that MA Services Group support. Other charities include Redkite – a non-government funding charity who support children and young people with cancer.

“This is a charity that relies entirely on the generosity of the local community and we’re proud to be a part of that community”, said a MASG spokesperson.

In addition, team members from MASG recently held their own ‘Biggest Morning Tea’ event where all donations went to support cancer research; and earlier this year – on what was one of the coldest nights – company founder Micky Ahuja spent the night on the streets and raised $900 in support of the homeless.

Back in 2016 MASG team members also got involved in the Big Issue Corporate Challenge where they sold copies of the magazine alongside Big Issue vendors and the company donated $5000 of gift cards towards the Fortnightly Vendors Breakfast Catchup.

The company state that:

“As their business grows they will continue to support worthwhile charities and causes within the local community and look forward to sponsoring and partnering with others in the near future. #GivingBack.”