Tickets for the upcoming LInkin Park &amp; Friends concert at Hollywood Bowl in Los Angeles available for cheaper price with discount code. TicketsTeam.com invites Linkin Park fans to save 5% on ticket orders by using coupon code LINK2017, and wishes to have a good time. 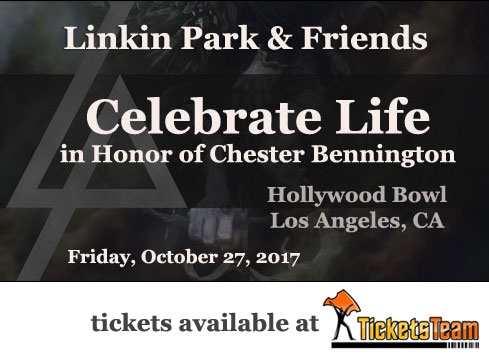 Linkin Park will held the concert at the Hollywood Bowl in Los Angeles, CA on Friday, October 27 to pay tribute to their late singer Chester Bennington. Tickets for the upcoming Linkin Park concert are available to order now at TicketsTeam.com, an online event tickets marketplace.

The five surviving members will be performing together for the first time since Bennington’s July 20th death. According to an announcement on the Linkin Park website, the band will be joined by a number of other artists, for an unforgettable night of music to honor the man that touched the lives of so many around the world. The concert will raise money for Music for Relief’s One More Light Fund in memory of Bennington.

Linkin Park band has also released a video for the title track of the band’s latest LP, titled “One More Light”. The video focuses on Chester Bennington both backstage with his band mates, as well as singers onstage, where he was surrounded by the legions of fans.

“‘One More Light’ was written with the intention of sending love to those who lost someone. We now find ourselves on the receiving end,” the band’s co-founder Mike Shinoda said in a statement. “In memorial events, art, videos, and images, fans all over the world have gravitated towards this song as their declaration of love and support for the band and the memory of our dear friend, Chester. We are so very grateful and can’t wait to see you again.” Another band member Joe Hahn added: “It has been incredibly emotional to work on this, and especially to watch it. I feel that by doing it, we not only faced some of our biggest fears, but it enabled us to use our talents to bring some light to people that need it. As we move forward to the Hollywood Bowl show and beyond, I think about the people that connect with the band, outside and inside our circle. This video is a gesture of good will to the people that want that connection.”

Linkin Park concerts usually were ones of the most awaited for alternative music fans. Linkin Park tickets are always among best sellers of concert season, and upcoming Chester Bennington Tribute concert by Linkin Park & Friends is already among the hottest ones in ticket sales at TicketsTeam.

TicketsTeam.com has all levels of seating and price ranges available to most popular rock and alternative music concerts, including Linkin Park & Friends concert at the Hollywood Bowl in Los Angeles, CA on October 27. It also provides a secure online ordering experience as well as 100% money back guarantee for the Linkin Park concert tickets. TicketsTeam.com is not affiliated with Linkin Park band, it’s members, their management team, tour venues, and is merely a ticket marketplace.