The Life on Life Initiative is a program dedicated to helping people gain functional freedom through literacy and other life skills. It involves three levels of contribution from corporate employees and LIFE Members: Financial contribution, Awareness campaigns and giving time directly to those in need. 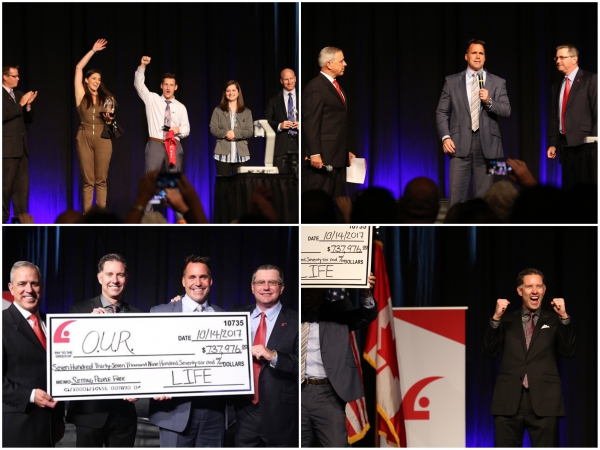 (1) On October 14th, 2017, LIFE completed its largest charitable Life on Life Initiative to date. Thousands of LIFE Members gathered in Louisville, Kentucky to participate in a push-up contest to raise money for Operation Underground Railroad (O.U.R.), a non-profit organization that rescues and rehabilitates children from sex trafficking.

The Life on Life project began in July of 2017, when All Grace Outreach spokesman, Chris Swanson, teamed up with O.U.R. Founder, Tim Ballard, and announced LIFE’s mission to raise $100,000 over the next 3 months. Despite being the fastest growing criminal enterprise in the world, child sex trafficking has received little attention in the media and public eye. That all changed when Ballard exposed the evils of this disgusting enterprise to thousands of caring and determined LIFE Members. After the announcement, it didn’t take long for LIFE Chairman of the Board, Orrin Woodward, to personally commit to supporting this cause and propose a fundraising challenge to the entire LIFE community to (instead) raise $1,000,000 for Operation Underground Railroad!

“LIFE has moved beyond building a business on purpose into building our purpose on business. Just as Christ came to earth to set the captives free, we have focused on setting people free financially. After hearing Tim Ballard’s heart-wrenching testimony, we knew the cause was worthy and righteous because it’s setting captive children free!” – Orrin Woodward

Those who attended the event in October would have witnessed people from all walks of life, all ages, and all physical abilities participating in a push-up challenge with one goal in mind: to raise money in order to save helpless children who are being exploited and sold into sex slavery. The outpouring of support from everyone involved was truly inspiring.

Following the contest, on Saturday evening of the convention, LIFE announced the push-up contest winners in each of the below categories. Congratulations once again to all of these winners!

The highlight of the evening was when LIFE CEO, Chris Brady, LIFE Chairman of the Board, Orrin Woodward, and AGO Spokesman, Chris Swanson, presented a check totaling $737,976 to O.U.R. representative, Matt Osborne, which was the current fundraising total at the time of the presentation.

“I was so blown away by the sheer goodness and generosity of everyone associated with LIFE and All Grace Outreach. It was amazing to see people from all walks of life and backgrounds, and representing many faiths, come together to do push-ups and raise funding and awareness for Operation Underground Railroad. Our operatives go into the deepest, darkest corners of the world and confront the worst of humanity to save exploited children. It was such an honor and pleasure to be with the best of humanity in Louisville, Kentucky.” – Matt Osborne (O.U.R. Senior Vice President for Rescue and Rehabilitation)

To date, LIFE has raised $811,540 for Operation Underground Railroad!

Here is what LIFE’s CEO and Creative Director, Chris Brady, had to say:

“This project has been an extreme contrast between ultimate evil and heartwarming good. The way the LIFE community united to help vanquish something as heinous as human trafficking truly embodies the ‘Making a Difference’ part of what we do. May the high profile of this project never fade, and may we never forget that there are people out there who desperately need our help.”

LIFE would like to extend a heartfelt thank you to everyone who was involved in making this Life on Life Initiative an overwhelming success!