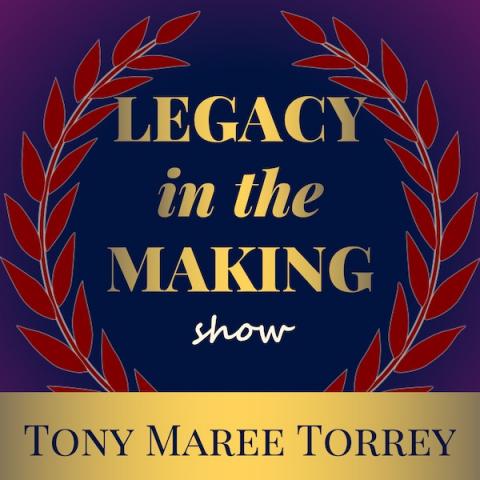 Tony Maree Torrey, LA’s Foremost Success Coach and Legacy Maker launches the Legacy in the Making Show, a video podcast that Interviews founding CEOs, thought leaders and high achievers who’ve gone beyond the superficial markers of success and use their positions to create positive change.

The show dives deep into the stories behind their success to give listeners practical, real world insights they can apply to their own journey. This dialogue raises the bar on business leadership. It answers the question:

“How do we lead with wisdom, transform limitations into strengths and prosper, while creating a positive impact?”

SOME OF THE FEATURED GUESTS TO DATE:

– Johnathan Keyser, Founder of an 8 figure real estate brokerage and author of You Don’t Have to Be Ruthless to Win who’s company’s core operating principle is based on selfless service,

– Matt Zagula, Founder of the SMART Advisor Network a team of advisors that make sure more Americans have access to similar financial strategies that are being leveraged by the wealthy elite;

– Stacy Paetz, the first first female sports reporter for the NBA at only age 19 who paved the way for women reporting on pro sports.

Just to name a few.

Legacy in the Making Show can be found on iTunes, Spotify, iHeart Radio, YouTube and other podcast distribution channels or by visiting https://legacyinthemakingshow.com/

For 18 years, Tony Maree Torrey has been hired by CEOs, celebrities and other top performers who want to make a difference for themselves and the future. Her clients have generated multiple 6, 7 and 8 figures, written best selling books, fast tracked or turned around businesses, landed TV and movie roles, launched professional speaking careers…all while being in alignment with their greater sense of purpose and contribution.

Australian born, she arrived in the US in 1989 with nothing but a backpack. Tony Maree climbed the corporate ladder to lead global teams. A chronic overachiever, she was simultaneously investing in real estate, building an executive coaching practice and juggling a busy family life.

No surprise, she got burnt out which culminated in a panic attack on the freeway. This singular scrape with death finally triggered the changes she knew she needed to make. Tony Maree dedicated herself to learning a better way to do life and create the inner peace, expanded awareness and clear purpose many people crave.

Her work took on an even deeper meaning when her parents unexpectedly passed away 2 hours apart and she didn’t miss it. This was a result of advanced inner guidance that prompted her to drop everything and jump on a plane home to Australia. She landed just 36 hours beforehand and with enough time for each of them to say their goodbyes.

Tony Maree realized that if it weren’t for the skills she’d developed over the years to hone her instincts and intuition, she would have missed out on being present for one of life’s truly critical turning points.

It became clear to her how many of her high powered clients were missing this piece of life’s equation. Caught up in striving, they were missing the opportunity to pause and listen to the inner wisdom that opens up the door to what’s truly important. As she shifted her coaching to address this gap, she saw incredible results as clients learned to pause strategizing long enough to listen to their own guidance. The messages they receive from their instincts are the answers that catapult them to their next level of visibility, profitability, impact and fulfillment.

Tony Maree launched the Legacy in the Making Show to deepen the conversation because she believes conscious leadership can change the world and positively impact the future for all of us.