A Langley BC Dentist in the spirit of Halloween is offering to install Cosmetically Bonded Vampire Fangs which lengthen the canines but do not interfere with the patient's bite. The Fangster's fangs are only seen when smiling or talking and are very surprising when revealed. 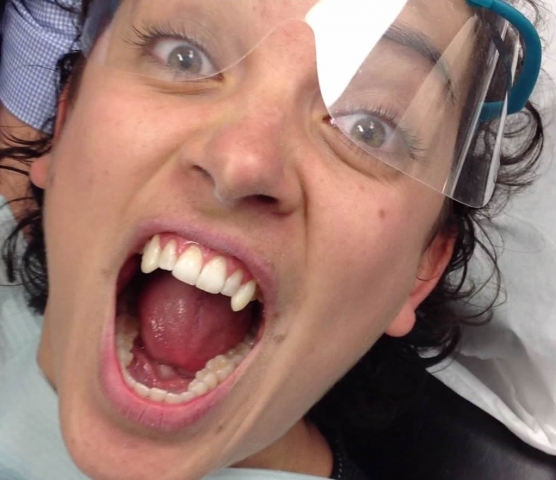 A Langley BC dentist is getting into the spirit of Halloween for 2017 and is offering to install realistic veneer fangs for Facebook contest winners.

To see exactly how veneer fangs are installed go to https://youtu.be/hMiH1PnGoGM or do a search on YouTube for Vancouver Dentist Fangs. The length of the video is 4:47. Installation time for 2 veneers is approximately 8 to 12 minutes. It is totally painless and involves no local anesthetic.

The fangs are pre-shaped, matched for color and the bite of the patient’s teeth before the procedure so only one appointment is needed. The procedure is the same as sculpting a beautiful tooth. The new fang teeth are built up with a very durable composite that is hardened by a special ultraviolet light. It is then polished and sculpted with a buffing attachment and the area is as smooth as a natural tooth.

The Cosmetically Bonded Fangs are specially designed to lengthen the canines but not interfere with the patient’s bite. They do not come off when eating normally and appear as if they really are a part of the patient’s own set of teeth. They are not too long to be uncomfortable during normal wear and not too short as to be too unnoticeable. They are hidden when the patient is not smiling or talking. They can be worn for the whole month of October or longer without any ill effects other than surprising someone the fangster comes in contact with. Imagine seeing a friend suddenly sprout fangs as they begin talking. The effect can be quite startling but that is to be expected in the fun month of October.

The idea to hold a contest to win a free fang installment was first thought up in 2015. There were many winners and there was even one person who wanted to keep them permanently, at least that was the thought, as they never reported back to have them removed. The video of the procedure was done and over 2 years it has garnered approximately 350,000 views on YouTube. In fact people from as far as Quebec have called and asked to fly in to have them done. Willow Dental Care Westend where it was originally done still gets the occasional fang request at different times of the year.

People not living in Langley or Vancouver BC Canada can get their local dentist to install them. Prices will vary in local areas. In Canada the cost would be about $300- $500 for 2 teeth. Removal is very easy, fast, pain free and takes no time at all with no damage to the tooth enamel.