Just Fitter’s latest release, the new and improved pack of Ketone Test Strips is off to a steady start in Amazon.com. The product offers three re-sealable packs of fifty strips each, allowing optimum usage for all users. 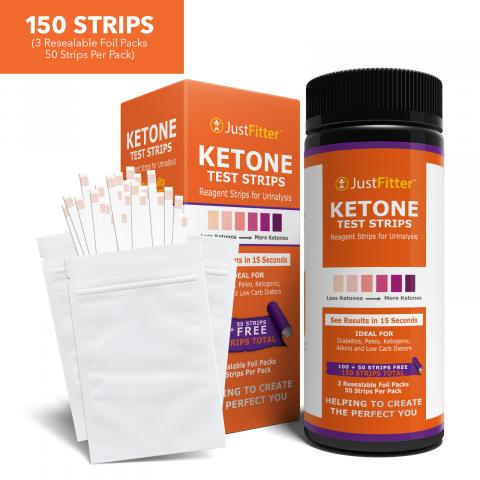 Just Fitter looks all set to script yet another success story in Amazon.com with their recently launched product Ketone Test Strips re-sealable pack. Within a very short lifespan, this product has received an excellent response from the buyers. Interestingly, this product was launched by Just Fitter based on feedback from their previous customers. The Ketone Test Strips re-sealable pack from Just Fitter is currently available in Amazon for at a 20% discounted price of $8 plus many additional benefits.

Ketones are produced as a by-product of Ketosis, a metabolic state where the body burns fat instead of carbohydrates for creating energy. The goal of a ketogenic diet is to eat in such a way that induces the body into ketosis. Experts suggest that the fastest way to reach ketosis with a diet plan is by limiting carb intake to approx 20g of total calories per day. Monitoring the ketone levels indicates the body’s level of ketosis and fat burning according to the type of ketogenic diet. Urinalysis ketone testing strips are used by thousands of people to reach their desired weight-loss outcome.

The ketone strips from Just Fitter were initially launched in packs containing one hundred twenty five strips capable of accurately measuring the ketonic state of the body. Many users have also used these strips for managing type 1diabetes. Though this product was extremely successful in Amazon, some users pointed out that they were not able to use all the strips in the pack because the strips retain their accuracy for a maximum of ninety days. To solve this problem, the new re-sealable packs of the ketone testing strips were introduced by Just Fitter. This improved version of the product offers one hundred fifty strips divided equally into three re-sealable packs. The users are now able to use the fifty strips present in each pack within ninety days.

“This new product has been introduced based on the requests from many of our customers. Our product specialists and the packaging experts have come up with a design that has already pleased them,” claims a senior spokesperson from Just Fitter. “Many users have already contacted us to say thanks.”

About Just Fitter: Founded in 2014, Just Fitter is dedicated to helping people achieve their best physical, mental, and spiritual health by encouraging them to embrace the benefits of a Keto diet lifestyle. Partnering with some of the best doctors, chemists, and nutrition scientists, the company has already helped thousands of people improve their lives in many ways including going Keto. Just Fitter also runs a popular Facebook page called createtheperfectyou, dedicated to helping people adopt the Keto lifestyle.