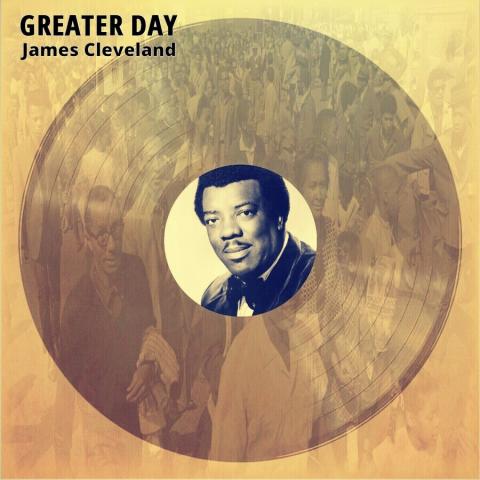 Sonorous Records Inc. has released the first album for 2022 titled Greater Day by the great James Cleveland. “These are original recordings from our HOB (House of Beauty) catalog that have been digitally enhanced while maintaining the original integrity of the recording” stated Ivan Cavric.

“In the upcoming weeks Sonorous Records will be releasing five more albums from the legendary gospel artist Reverend James Cleveland” says Cavric. Each album will contain original recordings that have been digitally enhanced by Mr. Kevin Gibson. Every effort has been made to ensure and maintain the recordings integrity.

The Reverend James Cleveland (c. 1931-1991) combined his talents as minister, singer, composer, and philanthropist to become known as the Crown Prince of Gospel Music.

Variously hailed as the King of Gospel Music and the Crown Prince of Gospel, the Reverend James Cleveland combined his talents as preacher, composer, singer, producer, and philanthropist to become one of the most outstanding exponents of the modern gospel sound. Indeed, with a voice that has earned acclaim as one of gospel’s greatest, and a religious fervor that has refused the lure of secular music, Cleveland, more than any artist of his generation, served as a champion of gospel in its purest form. As he explained to Ed Ochs in an interview for Billboard, gospel is not only “a music, but … a representation of a religious thinking. Gospel singing is the counterpart of gospel teaching. … It’s an art form, true enough, but it represents an idea, a thought, a trend.”

Born in Depression-era Chicago, the son of hard-working, God-fearing parents, Cleveland grew up in an environment where gospel flourished. His grandmother introduced him to Chicago’s Pilgrim Baptist Church, where the budding musician was influenced by choir director Thomas A. Dorsey—also known as the father of gospel music. Under Dorsey’s tutelage, the youth made his solo debut with the choir at the age of eight. The vocalist subsequently taught himself to play piano, often recounting how he practiced on imaginary keys until his parents could afford to purchase an upright for him. As Tony Heilbut quoted the star in The Gospel Sound: “My folks being just plain, everyday people, we couldn’t afford a piano. So I used to practice each night right there on the windowsill. I took those wedges and crevices and made me black and white keys. And, baby, I played just like Roberta [Martin]. By the time I was in high school, I was some jazz pianist.”

Roberta Martin, a Dorsey disciple and one of the Chicago gospel pioneers to gain international recognition, was among Cleveland’s idols. It was her group, the Roberta Martin Singers, who first helped shape the youth’s singing and piano style, with Roberta Martin herself inspiring the youngster to begin composing. By the time he was a teenager, Cleveland was singing with a neighborhood group, the Thorn Gospel Crusaders. And once the group began featuring Cleveland’s compositions, the artist found himself piquing the interest of prominent gospel talents. In 1948 Cleveland’s “Grace Is Sufficient,” performed at a Baptist convention, prompted Martin to begin publishing the new composer’s work.

Sonorous Records is an Independent record label. Offering full service benefits in partnership with Ingrooves Music Group and UMG. Owner of the venerable HOB (House of Beauty) catalogue featuring recordings of James Cleveland, Shirley Caesar and other great gospel artists. Established in 2011, we work with established artists as well as rising independent artists in all genres seeking to break into the major scene.