One of soccer’s all-time greats, Alessandro Del Piero, has scored a one-of-a-kind honor, he has been named the inaugural International Ambassador for Caterina’s Club, the nonprofit that feeds 5,000 pasta dinners to hungry Southern California children each night, with more than 6 million meals served. 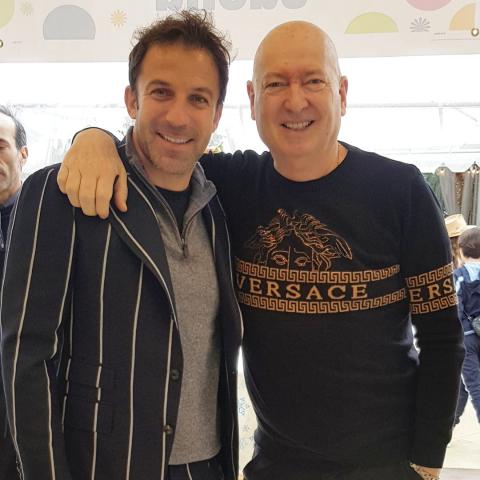 One of soccer’s all-time greats, Alessandro Del Piero, has just scored a one-of-a-kind honor, he has been named the inaugural International Ambassador for Caterina’s Club, the nonprofit established by humanitarian Sir Bruno Serato. Caterina’s Club is best known for serving 5,000 pasta dinners each night in 89 locations in Orange, LA and San Diego counties with more than 6 million meals served. In addition, the organization helps families escape living in drug and crime-ridden motels and relocates them into safer, cleaner and more permanent housing and its Hospitality Program helps divert at-risk high school students from the street by introducing them to career opportunities in the food, hospitality and service industries.

Del Piero is one of soccer’s best known and accomplished “footballers,” having won six Serie A titles, the Coppa Italia, four Supercoppa Italiana titles, the UEFA Champions League, the UEFA Super Cup, the UEFA Intertoto Cup, and the Intercontinental Cup. He is eighth in the all-time leading goal scorers’ sheet in the Champions League competitions—a remarkable feat by anyone, but especially for a secondary striker. He is also the all-time leading goal-scorer for Juventus and the most capped player in its illustrious history. As an A-League player, Del Piero is currently placed third among Italy’s all-time top scorers.

The Italian superstar, who hails from Conegliano, Italy, now lives in Los Angeles. He forged a friendship with Serato a decade ago, based on their mutual passion for soccer and great Italian cuisine. While Serato is chef/owner of the Anaheim White House Italian Steakhouse, Del Piero owns and operates No. 10 Restaurant in Los Angeles, a contemporary Italian establishment with multi-regional, seasonal cuisine.

“I can’t tell you how pleased we at Caterina’s Club are that this legend in the sports world has accepted our invitation to serve as our inaugural International Ambassador,” says Serato, whose family is from Verona, Italy. “Alessandro is a generous man whose compassion for the underprivileged runs deep. His involvement with Caterina’s Club will, no doubt, help us raise our visibility so that we can further our mission of service.”

Added Del Piero, “I’m delighted to accept this ambassadorship on behalf of Caterina’s Club and lend my support to this critically important nonprofit. We have so many people right here in Southern California who are suffering and this organization under Bruno’s leadership is making a real difference in their lives.”

Since the pandemic, the demand for Caterina’s Club’s services has increased multifold. In just the past year, for instance, the nonprofit has served more than 2 million meals and staff are working around the clock to meet the need. Headquartered in Southern California, Caterina’s Club reaches Orange, LA and San Diego counties though its impact can be felt in Chicago, New York, Texas, Mexico and Italy.