Debra Dion Krischke’s story is one of the many inspiring ones readers will learn from in a newly published book: Rise - In pursuit of Empowerment. Debra is a passionate women’s advocate and special event producer. 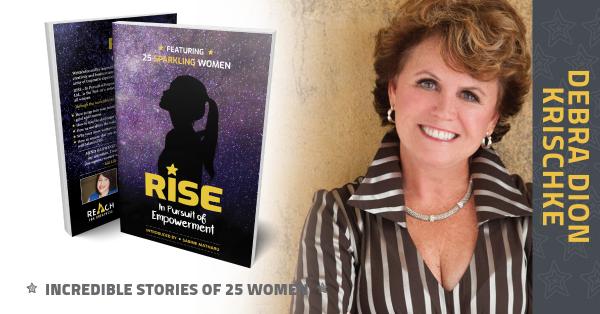 Debra Dion Krischke’s story is one of the many inspiring ones readers will learn from in a newly published book: Rise – In pursuit of Empowerment. Debra is a passionate women’s advocate and special event producer. Her path to success was riddled with thorns including betrayal. However, this taught her valuable lessons which equipped her with better knowledge enabling her to embark on her journey to success.

Her company Team Effort Events has raised over two million dollars and brought much needed awareness to women’s initiatives locally and globally. In 2015 she launched “Inspired Women Paying it Forward,” a quarterly, philanthropic networking group.

A recipient of numerous awards, in 2006, Debra was honored as one of Pennsylvania Governor Rendell’s “50 Best Women in Business”. She co-authored “Inspired Entrepreneurs – A Collection of Female Triumphs in Business and Life” and remains committed to helping women to be as successful as possible, no matter what stage of life they are at, enabling them to be in a better position to Pay it Forward!

Debra’s story is one of twenty five inspiring stories published in “Rise – In Pursuit of Empowerment” by Sabine Matharu of Reach For Greatness Publishing, the first in a series of four books which will guide readers in the following areas:

– Tapping into one’s intuition and inner strength to overcome stress, grief and trauma

– Taking challenges and turning them into opportunities

– Rising above the noise, victoriously

Written by and for inspirational entrepreneurial women whose hidden creativity and business acumen emerged despite facing an array of traumatic experiences, mindset and domestic battles, RISE – In Pursuit of Empowerment, is a beacon of hope for all women.

Through the incredible stories of twenty-five women, readers will learn that while obstacles are a given, they also have what it takes to rise above challenges, create a space and a niche for themselves while turning impossible experiences into incredible opportunities that are profitable and fulfilling at the same time.

Read Debra’s story and many other inspiring stories by investing in RISE – In Pursuit of Empowerment.

Find out about Debra here: www.InspiredWomen.com