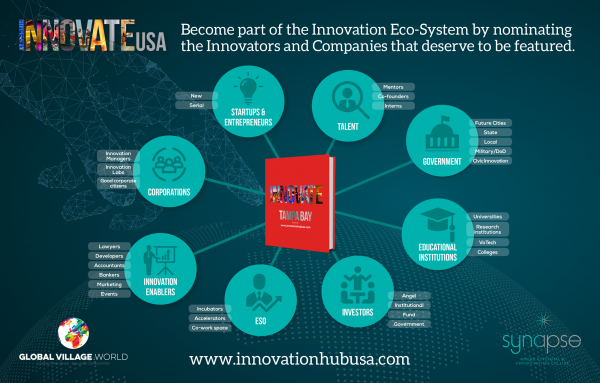 After the incredible success of Innovate Tampa Bay, a 350-page in-depth study of Tampa Bay’s innovation ecosystem that showcases the leading innovators, startups and innovation enablers in the region, everyone has been asking when nominations for the next issue will open.

The great news is that it is official, nominations and applications for businesses to be included in Innovate Tampa Bay Volume two will launch at the Synapse Innovation Summit at Amalie Arena in Tampa Bay on the 28th and 29th of March.

” It just make sense to launch volume two of Innovate Tampa Bay at such an esteemed event as the Synapse Innovation Summit.” says Sven Boermeester, the International Publisher at Global Village World, ” With more than 2500 visitors over the course of two days, the Synapse Innovation Summit brings together all the Innovators in Tampa Bay and surrounds and allows us to connect with them on a personal level. What makes the Innovate series so successful is that the innovators and businesses featured in the Series are nominated by the people in their local Innovation Eco-Systems.”

Innovate Tampa Bay is a superior quality coffee table book with augmented reality video, an online platform and a global network with a common goal of ensuring the best innovations and innovation enablers connect and succeed.

The Innovate publications are divided into three types of stories:

• The experts, thought leaders and academics with the ideas

• The innovations, the entrepreneurs, and the startups

• The supporters, funding agencies, service providers and enablers of Innovation for the ecosystem

The target audience for this omni media platform is not just experts, it is also aimed at business people outside of the Tech world who need to be in the know. Innovate Tampa Bay Volume two is for business leaders and decision-makers who can affect change in their industries as well as open-minded folk who want to know what and who there is to know in the ecosystems and play an active role in its growth and development.

Global Village World is an international publishing house that has published more than a 180 titles in 62 countries around the world over the past 10 years, connecting thousands of businesses all around the globe in the process. Their time tested blueprint for creating legacy publications that become a badge of honor for everyone involved has made Innovate Tampa Bay one of the most talked about books in the Tampa Bay Innovation Eco-System.

Global Village Publishing is hard at work rolling out the Innovate series to cities across America with Innovate Philadelphia, Orlando, Nashville, Miami, Atlanta, Raleigh, Charlotte, Palm Beach, Charleston, Birmingham and Salt Lake City in various phases of completion. All these books are published with the assistance of an associate publisher in the local markets to ensure that they capture the true pulse of each Innovation Eco-System.

We are always looking for Ambassadors with a passion for their city that want to partner with us in mapping out and promoting their local innovation ecosystems to the world” Says Boermeester, “Becoming a local publishing partner puts you front and center in your Innovation Eco-System as you get to interact with all the key players while collecting the top 100 Innovation stories of your city”.