INNOVATE MIAMI will showcase the companies, entrepreneurs, and organizations that contribute to Miami's innovation ecosystem in a 300+ page, high-end coffee-table book that is also tech-enabled. 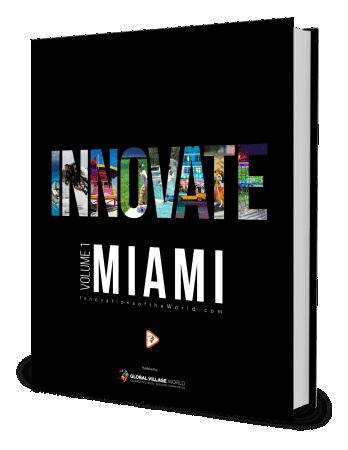 MIAMI, FL—A tech-enabled, high-end coffee-table book is in production for Miami-Dade County. Part of Global Village Publishing’s INNOVATE series, INNOVATE MIAMI illuminates facets of the city’s vibrant innovation ecosystem, from titans of industry to on-the-rise startups, across a variety of industries. Each organization is represented in a custom-designed spread with AR-video capabilities. As a whole, INNOVATE MIAMI is a one-of-a-kind snapshot of The Magic City.

“Miami is at the heart of so much innovation going on globally, and the epicenter for Latin America, but we wanted to focus on the ecosystem itself and on the networks that make it unique,” says Rodrigo Rodriguez-Novas, INNOVATE MIAMI’s publishing partner. “It’s really exciting to see them mapped out in the book.”

Instead of being included based on a “pay-to-play” model, participants in INNOVATE MIAMI are selected through research and nominations. This approach ensures that the book accurately reflects those making a difference in their city and in the world, no matter their size or industry.

“INNOVATE MIAMI represents the wealth of the city—financial and otherwise. There are so many great stories to be told, so much talent, opportunity and such a bright future for the city, it is a fascinating time to be a part of this ecosystem,” says Rodriguez-Novas. “I’m proud of how the book is coming together.”

In a digital age, the timelessness of a book solidifies participants’ legacies. Featured organizations worked with Global Village’s in-house editorial and design team to create their custom features, which are also published online at InnovationsoftheWorld.com.

Rodriguez-Novas, who has spent the last fourteen years in corporate Miami & Latin America, felt the partnership to be a natural extension of his business and consulting experience. In his past and present roles as Senior Vice President of Citibank and founder of Nordes Consulting respectively, Rodriguez-Novas has developed a keen sense of who’s most positively contributing to Miami’s innovation ecosystem—and INNOVATE MIAMI reflects it.

The INNOVATE series is part of Global Village Publishing. Sven Boermeester, Global Village’s founder and CEO, is an avid traveler and conceived of creating the coffee-table books as “love letters” to different cities he traveled to. Boermeester opened his first media company upon completing his business studies in Cape Town and since then has published over 183 INNOVATE and BEST OF editions across 60 countries.

Carel “Callie” Van Graan, Global Village Publishing’s COO, possesses a similar wanderlust. As a serial entrepreneur with deep experience in marketing, branding, and logistics—and having traveled the world with his family—Van Graan is well-suited to bringing the INNOVATE series into being.

“Global Village’s books really reward a closer look into the cities they feature,” Van Graan says. “This is true of INNOVATE MIAMI.”

INNOVATE MIAMI will be available through Amazon and through GlobalVillage.world in early 2020.

Global Village Publishing produces high-end, tech-enabled coffee-table books that feature cities around the world. Its series include INNOVATE—which celebrates the innovators and innovation enablers that make a city awesome—and the BEST OF series, each book a snapshot of the people, places, and businesses of different global locales. By teaming up with publishing partners on the ground in the cities featured, and by ditching the pay-to-play publication model, Global Village Publishing captures the ecosystem of a place and sees the world as an ever-growing tribe of entrepreneurs, colleagues, and friends. Learn more at GlobalVillage.world and at InnovationsoftheWorld.com.