Humanitarian and restaurateur Sir Bruno Serato will celebrate 2 milestones on Monday, April 12 when he and his team of volunteers serve up his 2 millionth meal during the pandemic and his 6 millionth meal served since he started his nonprofit 16 years ago. 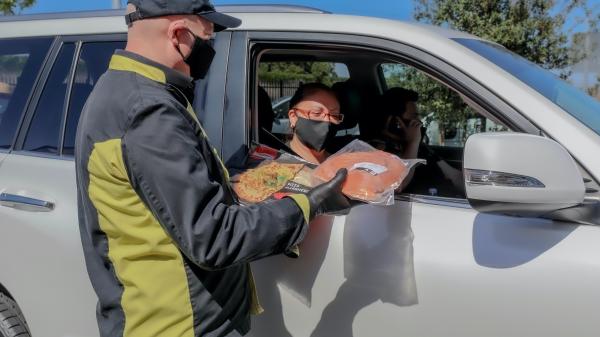 Humanitarian and restaurateur Sir Bruno Serato will celebrate 2 milestones on Monday, April 8 when he and his team of volunteers serve up his 2 millionth meal during the pandemic and his 6 millionth meal served since he started his nonprofit 16 years ago. The celebration will be from 1:30-4:30pm at Anaheim White House 887 S Anaheim Blvd, Anaheim, CA

During the event, he and his team will hand out meals to families who will drive their cars under an archway of colorful balloons and celebratory signs acknowledging the milestones.

In just one year, Serato has served up what it took him more than a decade to achieve when he started his nonprofit, Caterina’s Club, in 2005. While he typically feeds 5,000 children each day, the need has grown exponentially due to the great numbers of Southern Californians who are unemployed or underemployed due to COVID-19.

BACKGROUND: Headquartered in Southern California, Caterina’s Club reaches Orange, LA and San Diego counties. Serato’s influence has extended far beyond the local area to include Chicago, New York, Texas, Mexico and Italy. His nonprofit also helps families escape living in drug, and crime-infested motels and into safer, cleaner and permanent housing. His Hospitality Program seeks to divert at-risk high school students by introducing them to opportunities in the food, hospitality and service industries.

For his humanitarian work, Serato has earned international publicity including profiles in People Magazine, CBS, NBC, CNN as well as newspapers and magazines the world over. Among his many honors: CNN Hero, knighted by the Italian government, knighted by the House of Savoy, Ellis Island Medal of Honor, Papal blessing by Pope Francis, humanitarian award on the steps of the U.S. Capitol, and numerous proclamations, Man of the Year awards and other forms of recognition — all of which he accepts to generate public awareness of the needs of our most vulnerable population – our children.

Caterina’s Club is always seeking donations of tomato sauce and pasta for its food distribution program as well as socks and undergarments for children ages 4-18. For more information or to make a donation to Caterina’s Club, visit www.caterinasclub.org.