Hundreds of Customers LLC - Kansas City's SEO Agency - announced today they had created a #HoustonStrong tee shirt, and that they would be donating a percentage of each sale their new "#HoustonStrong" tee-shirt to help all of the victims of Hurricane Harvey. 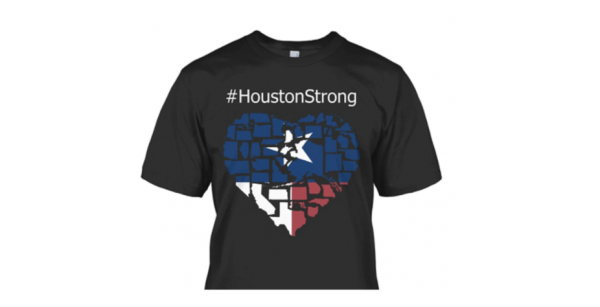 Kansas City Internet Maketing Agency Hundreds of Customers LLC announced today they had created a #HoustonStrong teeshirt, and that they would be donating a percent of each sale their new “#HoustonStrong” TeeShirt to help all of the victims of Hurricane Harvey.

Get the shirt here at https://teechip.com/houstonstrongrelief, which sells for $25

Hundreds of Customers LLC owner Justin West says his company has always admired non-profit organizations such as the American Red Cross and the work they do helping all of the victims natural disasters, like Hurricane Harvey. “I feel so far removed, but I want to help. So I figured let’s create a shirt that resonates with people, raises awareness, and then use that shirt to raise money for people in need.” West says that he’s thrilled to be able to give to an organization that has given so much and done so much good over the years. “Our intention is to donate to many different charities who are helping the people in Texas, but chief among them is the Red Cross.”

Hurricane Harvey and its subsequent flooding are, as of press time, still plaguing Houston and the surrounding areas, having caused at least $160 Billion dollars in Damages by some estimate.

According to West, anyone who purchases #HoustonStrong TeeShirt “not only will they get the best shows support for those suffering the effects of Hurricane Harvey, but they’ll simultaneously raise money for the American Red Cross [and other charitable organization] helping all of the victims of Hurricane Harvey.” The shirts retail for $25, and West says they’re hoping to be able to donate at least $5 per shirt, and possibly more. “When working with a mass teeshirt distribution company like TeeChip, the more we sell, the better the margins and the more we can donate; that exact amount isn’t always clear until after the campaign has ended.” If successful, the campaign will renew indefinitely.

“If you can do only one thing,” said West, “text Harvey to 90999 to donate $10 to the ACR [American Red Cross]; but I urge you to do all you can to help the many, many people who are now homeless because of this flood.” West later reflected, “I’m from Kansas, and our population is about 2.9 million people. Houston alone had a population of 2.6 million people. That’s like my entire state being displaced.”

About Hundreds of Customers LLC

Hundreds of Customers LLC was founded in 2012 by Justin West and seeks to help local businesses across the US to attract “hundreds of customers,” according to West. Recognized as leaders in Search Engine Optimization (SEO), Social Media Marketing, and website design