Although Santa Claus is meant to be on the move this time of year, the Stanley Arms Hotel has taken steps to ensure that Santa Claus stays exactly where he is. They say they're not being mean but want to stop him being kidnapped again 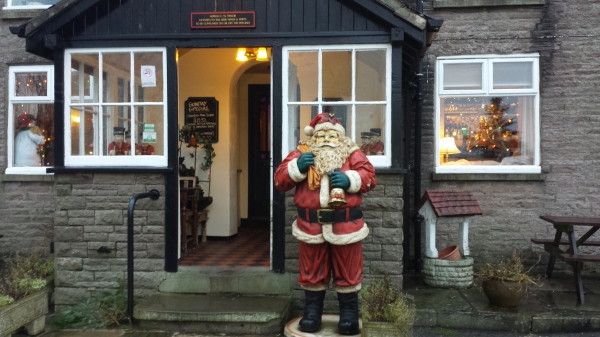 A couple of years ago managers Carolyn and Adrian Taylor were amazed when a local farmer knocked on their door to tell them that he had found a Santa Claus in one of his fields. And he believed it belonged to them! The Stanley Arms Hotel is situated in the hills between the silk town of Macclesfield, Cheshire and the spa town of Buxton in Derbyshire. And every christmas they bring out Santa Claus and put him on display.

Landlord, Adrian Taylor explains ” We were astounded to find that our Santa Claus statue had disappeared from it’s usual position just outside the front entrance of our hotel. But where do you start to look? It can’t be the easiest thing in the world to pick up and walk away with can it? We were racking our brains trying to remember the last time we saw it there. The only conclusion we could come to was that a few people had a bit too much christmas spirit and thought it would be hilarious to ‘relocate’ Santa Claus”.

Following this strange happening Santa Claus was re-positioned just inside the front entrance porch, a much more secure area. And this appears to have done the trick as he hasn’t gone off again since this new stratgey has been adopted.

At the time of the kidnap, locals were jokingly suggesting that if the farmer had found a sleigh and some reindeer as well in his field originally, then there might have been a different explanation for his sudden disappearance.

featuring the route through to Santa Claus’s xmas grotto.

The Stanley Arms Hotel offers luxury accommodation in it’s converted barn plus food and real ales in its restaurant and public bar areas. For more information on these then visit