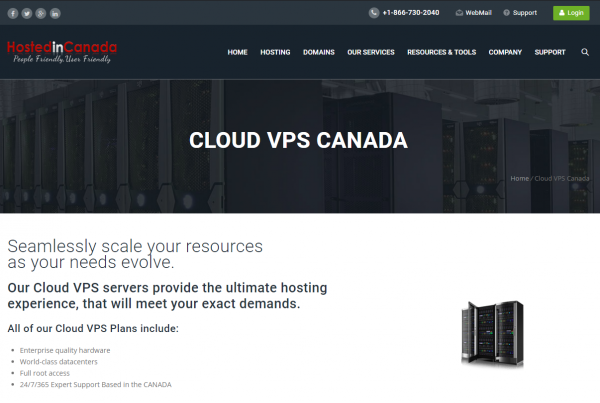 Hosted In Canada today reflected on its release of Cloud VPS – Virtual Private Server 3 Years ago, which was in development for 8 months. The main aim was always to to offer cost effective, secure and easy to manage cloud VPS in Canada…. and by defying convention, this Cloud VPS Server did so, with a difference.

If you have Data stored in another country, is subject to that country’s laws and regulations in regards to how data is managed, stored, and most importantly, how it is secured and kept private.

Dean Wolf, President at Hosted In Canada, says: “We wanted to try something new with Cloud VPS – Virtual Private Server. Anyone familiar with the Cloud Web Hosting in the Canadian market will probably have noticed how everyone else always seemed to rent American based servers in the USA. We felt this was a problem because the data is outside of Canada.”

Increasingly, Canadian data is being stored in the United States, where the privacy of the data is threatened by the Patriot Act and the Cyber Intelligence Sharing and Protection Act (CISPA). These acts allow American entities such as the NSA and the FBI to access data stored anywhere within the United States.

The ability for US governmental agencies to access data without warrant or notification to the owning party has resulted in the governments of British Columbia and Nova Scotia ordering that all data related to Health Services remain in Canada, even going as far as to keep them at the Provincial level. This is supported by a 2013 study that reveals that almost 25% of Canadian and UK businesses are moving their data out of the United States due to the passing of bills such as the PATRIOT Act and CISPA. This study indicates that data privacy and security is incredibly important. Businesses are moving their data to Canada, not only for the better privacy laws but for redundancy across a large infrastructure.

So as a welcome breath of fresh air, Cloud VPS – is based in Canada, easy to deploy and manage and quickly upgraded or downgraded on the fly.. Hosted In Canada chose to make this move because there is a need for Canadian corporations to keep there data in Canada.

Hosted In Canada has been in business for since 1995, being established in 1995. Since Day 1 it has always aimed to People Friendly, User Friendly.

Cloud VPS – Virtual Private Server is now available at Available on our website.. To find out more, it’s possible to visit https://www.hostedincanada.com/vps-hosting/

For further information about Hosted In Canada, all this can be discovered at https://www.hostedincanada.com/