Amelia Rose has released the 7th of her Bear Creek Brides romance novel series in paperback. It features a dedicated Montana pastor with a young woman whose main concern is caring for her sisters. 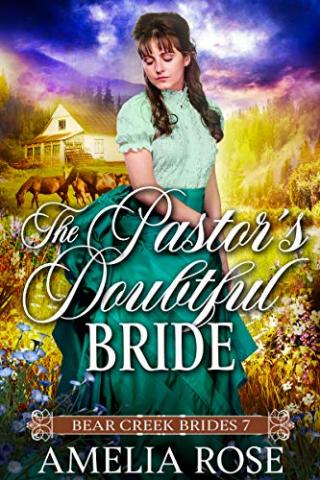 Details can be found at https://www.amazon.com/Pastors-Doubtful-Bride-Historical-Western/dp/1913591514

Set in 1894, the newly released novel features the story of a missionary pastor who encounters his future wife on one of his preaching trips. As such, it centers around the main protagonists, Pastor Barthelme Munster and Samantha Freda.

In the synopsis, readers are first introduced to the pastor who, it says, has been traveling around Montana, from chapel to chapel. This he does in a bid to fulfill his promise to God through spreading the gospel.

As the synopsis continues, readers learn that despite pastor Barthelme’s diligence in pursuing his God-given purpose, his heart longs for something more. This longing is fulfilled when he meets Samantha.

The writer then moves on to the female protagonist, who arrived with her five sisters in Montana and is trying to put a dark past behind her and move on. Her chance encounter with the visiting pastor takes place when she decides to attend Sunday service to welcome him.

Readers learn that despite not having any previous affiliations with a church, Samantha welcomes the opportunity to attend the service because she wants herself and sisters to fit into the community. Though their meeting each other was unexpected, Pastor Barthelme and Samantha find pieces of themselves in each other and this sparks feelings between them.

Given that Samantha has never dated before and coupled with the fact that her sisters’ wellbeing is at the forefront of her mind, marriage is far from her concern. However, readers learn that this doesn’t stop her from seeing a future for herself with the traveling pastor.

As is the case with all her novels, Rose’s synopsis poses questions that leave readers wanting to indulge in the story in its entirety. Readers are left to ponder on whether Samantha has the courage to prioritize her own happiness over that of her sisters, on whether or not Pastor Barthelme is able to make her see her worth, while at the same time recognizing that he himself deserves happiness.