His Blue Moon may be only one artifact among many in the ongoing and creative adaptation of the urban past, but it is conspicuous for the sensitivity and boldness with which it achieves an increasingly sought-after goal. 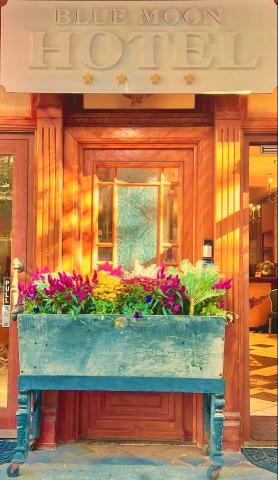 An eight-story boutique hotel called Blue Moon has at 100 Orchard Street, a cobblestone’s throw from the famed Tenement Museum across the street. Rates are highly competitive with New York’s other boutique venues. Except for two hosiery stores on the ground floor, this building had been abandoned since shortly after 1936, according to owner and hotelier Randy Settenbrino. “None of the newspapers and other printed material that we found scattered all over the second, third and fourth floors was later than that,” he said. This was the same time Mayor LaGuardia passed legislation that made it prohibitively expensive to use these addresses as residences. Understanding that the area was destined for better things, the Brooklyn-born Settenbrino acquired the Orchard Street property in 2000. Before going into the hotel business, Settenbrino, who is also a real-estate broker, worked in the apparel industry. He was initially trained, however, as an artist, which partly explains why he has conceived of his hotel as a kind of neighborhood museum.

He applied all the painted faux finishes himself. Every architectural and ornamental detail that was salvageable, from banisters to oak wainscoting, has been restored and, where necessary, recreated. And the abandoned memorabilia from the upper floors — sheet music of the 1920s, old newsprints in English and Yiddish, bills of lading, calling cards, letters — has been lovingly framed and displayed throughout the hotel. A granite-clad penthouse was added, and recessed from the street line, so it doesn’t read as part of the original building. “With gentrification,” Settenbrino says, “they take out everything. They ruin the facades. At the Blue Moon, I tried to get as close as I could to historic preservation while still keeping the place functional and modern.”

Each of the Blue Moon’s 22 rooms and suites is named for a vaudeville luminary associated with the neighborhood: Eddie Cantor, Fanny Brice, Sophie Tucker. All have period furniture and lavish bathrooms with tiled floors and old-fashioned fittings. On the higher floors, guests have commanding views of the Lower East Side, from the courthouses on Center Street to the Manhattan and Brooklyn Bridges. Given the high occupancy rates that the hotel has enjoyed since it opened, Settenbrino is clearly doing something right. His Blue Moon may be only one artifact among many in the ongoing and creative adaptation of the urban past, but it is conspicuous for the sensitivity and boldness with which it achieves an increasingly sought-after goal.

The Blue Moon Hotel is located at 100 Orchard St., between Delancey and Broome streets.