For the 75th anniversary of D-Day, a couple of property owners in Cornwall in the UK are commemorating the role their house played in preparations for the invasion which led to victory in Europe. 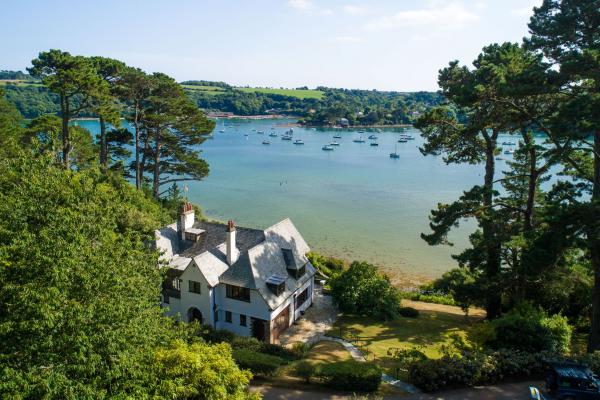 The owners of a holiday home on the Helford River in Cornwall have been commemorating the property’s role in the success of the D-Day landings.

This year marks the 75th anniversary of D-Day when thousands of soldiers left the shores of the Helford River to take part in the D-Day invasion of Normandy to fight German forces.

Ridifarne, located close to the village of Helford Passage near Falmouth, was requisitioned during the war as the Cornish headquarters of the Special Operations Executive (SOE), a unit of the Royal Navy’s secret intelligence service.

As part of the local D-Day celebrations, the current owners Michael and Joan McLeod have been remembering the unique role the house played in the war.

The property was used as a base for undercover missions to the coast of France to ferry intelligence agents and exchange top secret documents.

From here, the Helford River Flotilla undertook covert trips disguised as French fishing boats to mingle with local fishermen and exchange information. Officers recalled that they sometimes dressed as Breton fishermen for their missions and were dubbed the ‘Pirates of Penzance’.

Ridifarne was selected as the ideal shore base for SOE operations because it was ‘surrounded by trees, fairly inaccessible to strangers, with its own steps down to the foreshore and opposite the deepest part of the river’.

Emily Boriosi from Cornish Holiday Cottages, which manages Ridifarne as a holiday let, commented: “The owners are rightly proud of the property’s association with the war effort and the preparations for D-Day.

“It’s interesting that what made Ridifarne the ideal base for covert operations leading to freedom in Europe are the very reasons why the house is so special for visitors – it’s private, secluded location on the banks of this beautiful river estuary.”

Cornish Holiday Cottages is based in Mawnan Smith – the small Cornish village through which British and American troops passed on their way to the embarkation point on the beach at what is now Trebah Gardens.

The company promotes holiday cottages, houses and apartments in the Falmouth area of Cornwall, and represents many properties on the Helford River which played such a vital role in D-Day.

Emily Boriosi said: “It’s hard to believe the massive part this usually quiet area played in our victory in the Second World War. It’s all part of what makes it such a unique and interesting area for holidaymakers to visit.”