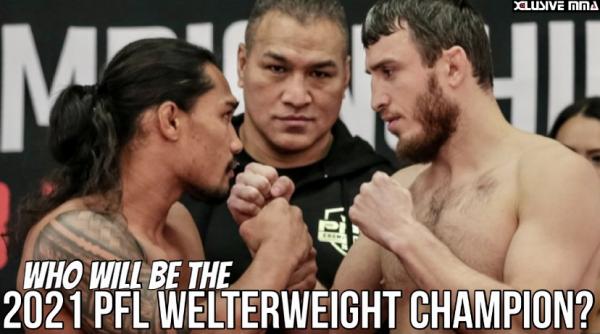 There’s too much history between the two PFL Welterweight Title Challengers. On Oct. 27, Ray Cooper III will rematch Magomed Magomedkerimov in the 170-pound finals – the two met for the million-dollar prize in 2018.

Magomed Magomedkerimov submitted Ray Cooper III on the second round via Guillotine Choke. It was a surprise seeing Ray Cooper defeated at an early round. He was caught off guard. Everybody was stunned because Ray Cooper was the crowd favorite.

Ray Cooper iii was crowned the 2019 PFL Champion and won the prize.

On October 27, 2021, the PFL Welterweight Championship will take place.

Magomed Magomedkerimov will face Ray Cooper III on a 5 Round War. Who do you think will win?

The big question is, how will Ray Cooper defeat the Russian Warrior Magomed Magomedovkerimov who submitted him in 2018?

Awaiting him in the welterweight finals with $1 million on the line will be a familiar enemy, the same man who defeated Cooper in 2018’s season one finals, No. 4-seeded Magomed Magomedkerimov (29-5).

“I knew this was going to happen,” Cooper said. “This was my plan. I’m going to run through everybody and I get him next. You’re not going to be able to get away this time.”

Magomedkerimov steamrolled over injury replacement Sadibou Sy (9-6-2) in the night’s co-main event to win a unanimous decision (30-27, 30-27, 30-27) and advance to his second welterweight final of PFL’s three seasons. In a grinding and sluggish fight, Sy had no answer for Magomedkerimov’s takedown, and though neither man scored much — if any — substantial offense, Magomedkerimov was in complete control throughout the bout.

The 31-year-old Russian now holds an undefeated 10-0 record inside the PFL cage and very well could’ve been fighting for his third consecutive championship had he not been forced to withdraw from season two’s tournament due to an injury he suffered in the quarterfinals.

It is very early to predict but seems like Magomedkerimov is the crowd favorite in PFL Season this year.