Xclusive MMA aims to be the number one source to deliver you the best and most up to date MMA Fights, Fighter Statistics, News, Fighter Schedules, Rumors, Forums, and Blogs all through out the Hawaiian Islands. Join the Xclusive MMA Community 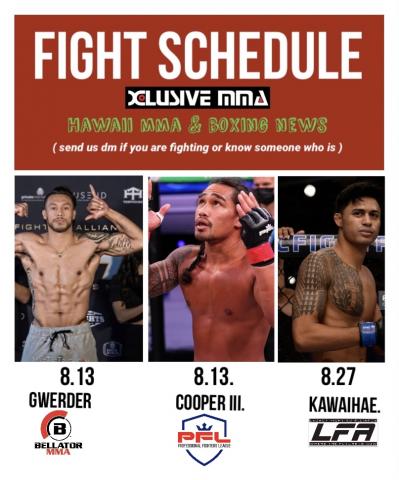 Find out who will scrap this month!

Check out the lists of Hawaiian fighters/fighters from Hawaii fight schedules (the lists are subject to changes.)

This month of August, fights will be Ray Cooper iii, Ty Gwerder, and Canaan Kawaihae.

Ray Cooper iii and Rory MacDonald are equal in experience, both have 22-7-1 fight records. The only difference is Ray Cooper has earned Welterweight Title and won the million dollars in the 2019 playoffs.

The event will take place on August 13, 2021, at Ocean Resort Casino, Atlantic City.

MacDonald and Cooper III will be the MAIN EVENT of the PFL SEMI-FINALS TOURNAMENT.

“I’ll stomp Rory MacDonald twice – ‘if he even makes it through the season.”

“We’ll see how his body holds up, and let’s see how mentally tough all these other fighters that have to fight four times within six months (are),” Cooper said. “I did it twice. I’ve got eight fights in these two years. So we’ll see how tough these guys are.”

The event will take place on August 13, 2021, in Uncasville, Connecticut

Hawaiian fighter Ty Gwerder, 26 years old, holds a record of 5-2-0. Gwerder is coming off a decision loss to Dalton Rosta at Bellator 250. This fight will mark Gwerder’s 4th fight with the organization. With two losses and one win, Gwerder is looking forward to getting back on the winning side.

Ty Gwerder’s opponent, Khadzhi Bestaev, is also coming off of a loss from Dana White Contender Series. Bestaev has a fight record of 10-4-0; Bestaev will be making his Bellator debut, and who better to welcome him than the seasoned Hawaiian Vet – Ty Gwerder

Both men will be looking for a win under Bellator.

Hawaiian fighter Canaan Kawaihae is a 23 years old MMA fighter who holds a record of 6-1-0. Kawaihae is coming off a massive win against Jake Childers at LFA in April this year. Canaan Kawaihae submitted Jake Childers via Ninja Choke on the very first 20 seconds of Round 1. That win set him up for this month’s Main Event against a Top Brazilian opponent – Bruno Souza

Bruno Souza, a 26 years old fighter from California, has a fright record of 9-1-0. Fighting in LFA since 2019, Bruno Souza has a nine-win streak. This will be his 5th fight with the organization.