Find out who will scrap this month! Check out the lists of Hawaiian fighters or fighters from Hawaii schedules.Subscribe at Xclusive MMA for weekly MMA and Boxing News! 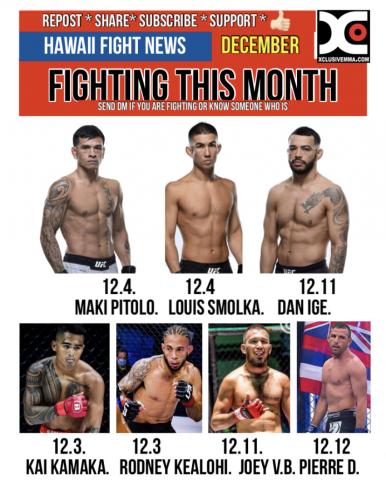 1. Kai Kamaka vs John de Jesus on December 3 at Bellator 272: Pettis vs. Horiguchi.

Kai Kamaka III, 26 years old (8-4-1), a local of Pearl City, Hawaii, will be making his return to the Octagon but not with the UFC. Following his two consecutive controversial losses and a Draw, Kamaka’s manager Brian Butler (SuckerPunchEnt) managed to find him a new home and Kai Kamaka III will be returning to Bellator at Mohegan Sun Arena cage coming December 3.

2. Rodney Kealohi vs Clayton Carpenter on December 3 at LFA 119 in Phoenix, Arizona

Rodney, “the Captain” Kealohi, is a 26 years old flyweight from Hawaii. He is representing Alberquerque, New Mexico, and trains at JacksonWink MMA.

The captain has a fight record of 5 wins and two losses. He looks forward to bounce back on his Loss

Rodney took his second Loss in May against a tough American Kickboxing Academy prospect – Mark Climaco. Climaco’s ground game was very efficient that Kealohi has no answer for.

Kealohi made his LFA DEBUT in October last year against Mefi Monterosso. The fight ended in the first 30 seconds of the fight via a Flying Knee to the body and punches.

Clayton Carpenter is an undefeated fighter from Arizona who trains at MMA LAb. This fight will be Carpenter’s third fight in LFA. Clayton Capenter has a fight professional record of 4 wins. 6 wins 1 loss as an amateur.

This is not going to be easy. This is in fact the toughest challenge there is!

The winners of the quarterfinal stage bouts in each bracket will meet each other in the semifinals. That winner will represent his respective country and face off in the championship stage of the bantamweight tournament.

Louis Smolka returns to the Octagon on Dec 4. Louis Smolka was supposed to fight Sean O’Malley in July but was canceled due to an injury.

Louis Da Last Samurai has a fight record of 17 wins and seven losses, eight and 7 in the UFC.

Please don’t get fooled by Louis Smolka’s record; he is a very unpredictable fighter. He fought muscle fighters twice his size and defeated them either via knock-out or submission.

in December last year, Smolka fought Jose Alberto Quiñonez where he won via ground and pound

Vince Morales, a 31-year-old fighter from Oregon, has a fight record of 10 wins, five losses, two wins, and three losses in the UFC.

Morales fought one time in Bellator.

Maki Pitolo is a 30-year-old fighter from Hawaii. Pitolo made a name for himself in Hawaii when he knocks out all the formidable opponents there.

Maki then achieved his UFC dream when he knocks out his opponent Justin Sumter in Dana White Contender Series.

Pitolo didn’t win on his UFC debut in New Zealand, but he always put on a show.

He knocks out Charles Byrd on the second round, then puts him into retirement after the fight.

Maki has three consecutive fight losses at the moment, but every time he leaves the cage, he learns and adjusts himself accordingly.

Duško Todorović is a 26 years old fighter from Belgrade, Serbia.

Todorović is also known as Thunder for a reason. He knocks out fighters in Serbia, Japan, and Europe at a young age.

That was his golden ticket to the Dana White Contender Series, where he faced the toughest opponent of his life – Teddy Ash.

In 2019, Todorović won the fight via Unanimous Decision. He didn’t get the finish, but Dana White saw massive potential in him. Dana White took Duško Todorović gave him multiple contracts in the UFC.

After three fights cancellations, he finally made his first appearance in UFC in Abu Dhabi. Duško defeated Dequan Townsend in a sterling manner. Ground and Pound on the second round.

He came in with a lot of hype because of his undefeated record of 10 early this year.

That perfect record of 10 wins was taken away by Hawaii’s Punahele Soriano.

He then lost to Gregory Rodrigues via Unanimous Decision in June.

Josh Emmett, a UFC Veteran since 2016, has a fight record of 16 wins and two losses, 7-2 in the UFC. Emmett has three consecutive wins at the moment.