Kayser the number one intimates, sleepwear, socks designer and manufacturer seeks global distributors. Thinking outside the box: Ross is quoted as saying: "Once you become fearless, you become limitless." The Kayser Global Initiative is to have franchised stores in every capital city. 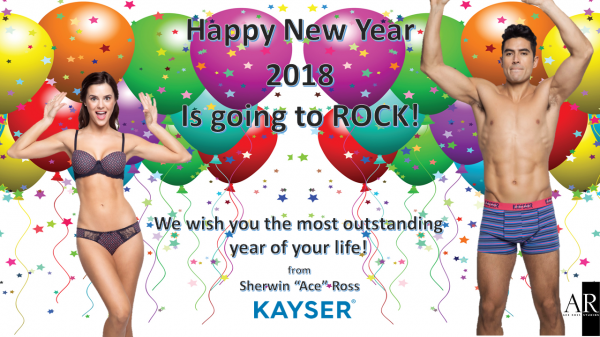 Kayser and Ross wish you an outstanding New Years filled with success, health, happiness and fearlessness!

Kayser, the renowned 100 year old brand, designer and manufacturer of intimate underwear, sleepwear and socks for family men, women and children, has launched a search for global entrepreneurs. In addition to this, it has welcomed Créations Cindy Ann, Inc. as exclusive Canadian Franchisee Distributor.

It’s been a great year states Ross of Kayser International. Kayser signed distribution deals in the USA, Canada, The Middle east and South America. Ross is looking forward to open the territories in Jamaica, The Bahamas, Trinidad and Tobago, Grenada, France, Pakistan, Bangladesh and many other countries around the world.

Ross, a native of New York City, has been involved with the apparel and celebrity licensing arena for 35 years. Ross was a professional recording artist in France at 17 years old. He then transitioned to acting in TV, commercials, film, and theater. After touring as Berger in HAiR the Musical, Ross created “She’s Got Legs” cotton lycra printed hip hugger bell-bottoms in the early 80’s. The bell-bottoms became a hit in the modeling and rock star world. Brooke Shields often visited the Broadway and Spring Street location. The brand was carried by Macy’s and his own retail outlet in Soho, NYC. In response to a question on the driving force behind his success, Ross has explained how it really boiled down to finding his passion in making a difference for others on a global scale. He consults with entrepreneurs to design programs within their business niche to give back to their workers, families and communities.

Founded in 1908 in the United States, Kayser is the top provider of family intimate sleepwear in Chile. It has 352 branches in 44 countries around the world, with over two thousand ports of sale, and is now in the Middle East, South America, Mexico, the Caribbean, Canada and the USA.

For franchisees, owners and investors, an exclusive agent is required in many countries. Kayser provides the franchisee and distributor with everything they need, including marketing, store fixtures, apparel and Amazon personal contact.

The opportunity is managed by Sherwin “Ace” Ross, a recognized New York / Los Angeles apparel and marketing executive, former president of ONE Clothing Company. Today, Ace represents Kayser, the number one sleepwear company in Chile, with 70 stores, and wholesale and retail distribution in 44 countries.

The Kayser Global Initiative: Kayser will have a store in every capital city including online and wholesale distribution in every country! The company is now seeking franchising and distributor partners in numerous European, African, Far East countries, The Bahamas, Trinidad, Tobago, The Bahamas and Cuba so that the brand can be expanded creating jobs and enterprise on a Global scale.

Now Ace is determined to help Kayser reach the next level as the international representative of the company. Ace said that the key to his success is being passionate about what to choose to do, so it does not become a job or work.