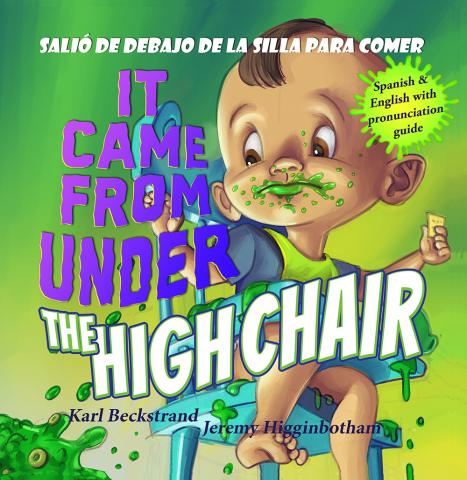 MIDVALE, Utah – Karl Beckstrand’s 22nd book, “It Came from under the High Chair: A Mystery,” almost never got published. “I thought the concept of a monster made of spilled food might be too disgusting,” he said. “Then I saw all these best-selling bathroom humor books and figured the world was ready for my 20-year-old idea.” he said.

A media professor at a state college, Beckstrand always sneaks some education into his stories. “I think kids don’t mind learning if they are being entertained,” he said. This funny children’s picture book teaches prepositions in Spanish and English. It includes a bilingual pronunciation guide, a mysterious visitor, a mixed-race family and online secrets. The English version debuted in April at #1 in its Amazon category.

Beckstrand, who speaks Spanish and is learning German, has taught English as a second language as a volunteer for more than a decade. “It Came from under the High Chair” is his seventh bilingual book and the fifth in his Mini-mysteries for Minors series (others in the series: “Sounds in the House,” “Crumbs on the Stairs,” “She Doesn’t Want the Worms” and “Why Juan Can’t Sleep”).

Most of Beckstrand’s titles have online extras and surprise endings. In 2016 he won an International Book Award for his western novel “To Swallow the Earth.” His work has been praised by Publisher’s Weekly, Kirkus, Horn Book’s blog and School Library Journal. During the past six months two of his titles have spent weeks at number one in more than one Amazon category.

As a kid, Beckstrand wanted to be a rock star — not a writer. Before being published he worked in human resources, hospitality and public policy. His first publisher died the day his book was to print. Even after getting a master’s degree in international organizations, Beckstrand feels his most valuable education has come from running a business and living abroad. “I did get to sing professionally — in a wedding band,” he said. So his bucket list is mostly complete.

“It Came from under the High Chair,” features Filipino and Polynesian children, a wanna-be superhero, finding/counting activity, dyslexic-friendly font and vivid illustrations by Jeremy Higginbotham (for kids ages 4 and up, including dual language/ESL/ELL students).