GoSun announces the launch of the Chillest, the ultimate solar-powered refrigeration system. This electric solar-powered cooler lets users cool and freeze anything without using any ice. 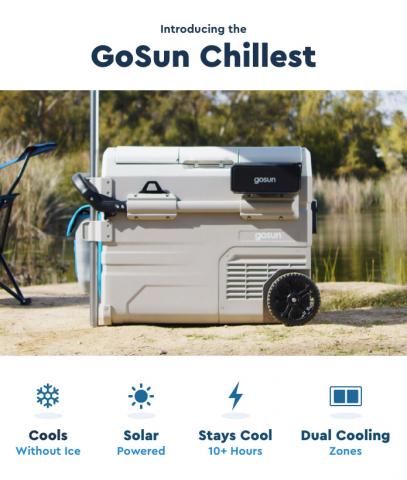 GoSun’s products are versatile by nature — they let you cook without gas, desalinate water without electricity, and freeze your feed without the need for an electrical socket.

Its newest product is perhaps our most versatile yet: The Chillest. What is the Chillest? It’s the ultimate solar-powered refrigeration system. this electric solar-powered cooler lets users cool and freezes anything they want for hours without using any ice. The Chillest doesn’t just chill food and drinks, it keeps them frozen.

GoSun launched the Chillest on Indiegogo and so far it has blown past the wildest expectations of the company. It originally set out to raise $15,000 in pre-orders but as of this writing (June 23rd) is nearing $1 million. This is over 5,000% percent of the original goal. The crowd-funding campaign will continue until Friday, July 2nd, to pre-order the Chillest.

What is so great about this solar-powered cooler? The dual cooling zones provide a freezer and fridge in the same device. One can set the temperature for each side anywhere from -4°F to 68°F (-20°C to 20°C) using the included App and touch buttons. Users enjoy the coldest drinks in camp and frozen ice cream ready for dessert.

It also serves as an outdoor entertainment system. The optional Bluetooth speaker kicks out amazing sounds while connecting to smartphones from up to 50 feet away.

“We wanted to design a cooler that could truly be the life of the party,” said GoSun Founder Patrick Sherwin. “Building on our experience with solar-powered outdoor products, we took what Coolest Cooler couldn’t achieve, and made it a reality.”

Below are some of Chillest’s best features.

Internal Battery: Has an internal battery that can keep foods and drinks cool for up to 10 hours on a single charge.

AC/DC: Plug into AC or DC as an extra fridge during emergencies, for days out on a boat, or as the ideal fridge/freezer for a van or RV.

“At GoSun, we’re passionate about providing innovative solar products and appliances that let people ditch their reliance on ice and fuel, to enjoy the comforts of home anywhere,” said Sherwin. “Whether you like to travel off-grid or chill in the backyard, our gear is designed to help you enjoy that time. Chillest is no exception. While Chill keeps food cold, frozen, dry, and organized with no ice required, Chillest does all that while providing everything else you need for a fun day or weekend in the outdoors.”

The lightweight and very portable cooler make less power go a lot further with the most advanced, all-electric brushless DC compressor technology. It has multiple options to keep it charged up and cold (none of which require ice).

The 45-liter cooler prepares one for any outdoor event with a built-in battery and all-terrain wheels plus thoughtful extras like inside lighting, tie-down straps, and organization baskets. It also has a built-in compressor that lets one set the temperature right where you want it with a range from -4°F to 68°F (-20°C to 20°C).

Without the need for ice, a user can take advantage of 100% of the cooler’s volume. GoSun Chillest has nearly double the room for food and drinks when compared with coolers of equal dimensions.

These features allow users to cool and freeze anything for hours without using any ice. The Chillest doesn’t just chill food and drinks, it keeps them frozen.