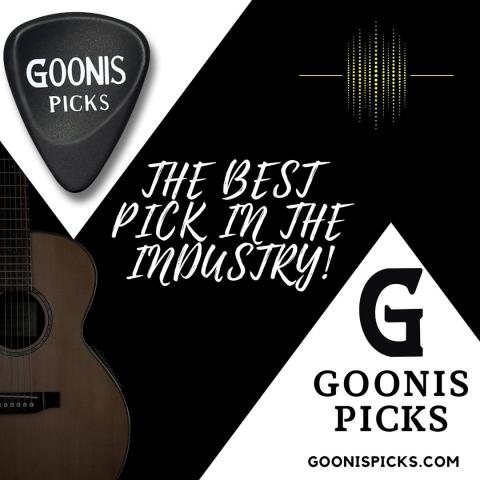 Goonis Picks launched and brought its uniquely designed 3D asymmetrical guitar picks to market in 2019. For both hobby and professional guitarists, these unique picks are designed to empower playing with more accuracy and endurance. The company made its first appearance at the NAMM – National Association of Music Merchants – Show in 2020. Goonis Picks has focused on connecting with more guitar enthusiasts in the interim and looks forward to joining NAMM once again, especially after hearing of the enthusiastic forecast for the June 2022 event.

“The industry has not stopped evolving and innovating during the pandemic, and The NAMM Show is evolving, as well,” says Joe Lamond, NAMM President and CEO after rescheduling the show . “After carefully listening to companies here in the U.S. and around the world, the new dates will help members maximize their opportunity and accelerate what has arguably been a transformative time both in new products and in how they come to market. I imagine this gathering will have the kind of impact of a Beatles moment or the introduction of MIDI—definitely one you will not want to miss.”

The show was originally planned for January 2022, and and Goonis Picks is eager to join again. “Our original goal for Goonis Picks was to change the game with the best guitar pick ever created. The feedback and reception we got from NAMM attendees and vendors in 2020 says we have met that goal,” says inventor Jordan Goonis. “We gave out over 1000 picks that year because we simply wanted to share the potential. The responses we got told us this pick helps guitarists do what they love and do it better than ever. The pick is like a saddle for your thumb and finger. This design makes it the most comfortable and user-friendly pick in the industry. Guitarists say they play with more endurance and accuracy…and that’s important. We want them to never drop, slip or spin another guitar pick again!”

The unique guitar picks were created from a passion for both excellence in design technologies and for music. As a designer in the automotive industry, Goonis is committed to continual improvement in all he does. As a studio and hobby musician himself, too, he grew more and more frustrated with classic guitar picks always spinning, slipping and dropping. He wanted to improve his own playing, so he put his skills to work.

With his own high-end design software, he put his concepts through different stages until he came up with the perfect one. The first time he 3D printed and tested the pick, he knew it would be a game changer. After testing the pick for a couple of weeks, Goonis found his endurance had gone up, and his picking was more accurate. When he was able to play like the pick was an extension of his own hand, he knew he was on to something. Playing with a pick, in general, creates a brighter and warmer tone. It also allows more control and enables explorations of new techniques. That’s why Goonis Picks are powerful tools for newbies and veteran players, alike, and players at every point on the spectrum will be present at the upcoming NAMM show.

“We’ve heard over and over again from attendees of NAMM 2020, including Grammy Award winners, that Goonis Picks are the best guitar picks they’ve ever used. We look forward to putting the power more musicians hands – literally – at every level at the show this year.”

Heading into its third year, Goonis Picks feels confident in its ability to positively impact attendees and fellow vendors of the upcoming NAMM Show and the industry, in general.