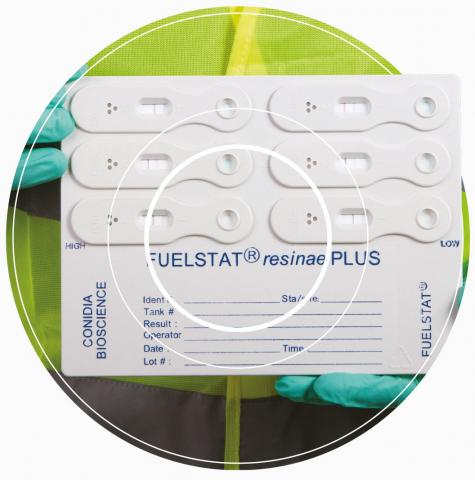 Microbial contamination can be a detrimental occurrence within any vehicle, causing a multitude of different concerns for owners and operators alike. This is why FUELSTAT Plus has been developed by Conidia Bioscience to aid people in the diagnosis of contamination as early as possible.

Microbial contamination in aviation and diesel fuel is commonly referred to as “diesel bug,” which simply indicates that the diesel fuel has been polluted with microorganisms such as bacteria and fungus. Water or moisture can enter diesel fuel by condensation, rainfall penetration, or adsorption from the air.

Consumers can choose between two versions of FUELSTAT Plus: one for detecting microbial contamination in diesel fuel and another for detecting microbial contamination in jet fuel. Both of these accessible types come in boxes of eight, appropriately labelled for their respective usage (Jet fuel or Diesel), and come with detailed instructions for each test.

FUELSTAT Plus is a fuel testing kit that is particularly built and tested for microbiological contamination. Users can now detect contamination at the earliest possible stage. Treatment of microbiological contamination in the early stages is faster, less expensive, and less dangerous than treatment in the later stages. In the worst-case situation, microbial infection may gravely damage tanks and, if left uncontrolled for an extended length of time, can lead to microbially induced corrosion (MIC) of the tank due to the acid created.

For more information about the fuel testing kits, what they do and why they are important, please follow on to this website: https://conidia.com/