Ft Lauderdale wheelchair basketball player of the Sharks gets nominated to be a Junior Caption at the Winterfest Boat Parade. 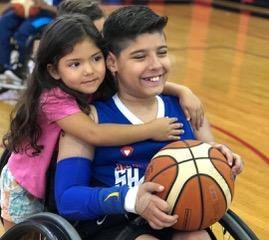 FORT LAUDERDALE, Fla. – A wheelchair basketball player for the Fort Lauderdale Junior Sharks, Richard, 11, is in the running to be Junior Captain for the Winterfest Boat Parade.

“We are so proud of Richard and our entire team,” Chang said. “Votes mean not only he wins, but our team wins!”

Voting has commenced and while Richard did not win the $1,000 prize, he will be able to participate as a Junior Caption on the boat. Melisa had this to say, “Our whole team was so proud to be part of this process and for Richard to have been nominated. Of course we would love to of won the prize, but the greater victory is the joy it brought to Richard and will bring to him being able to participate as a Junior Caption for the parade.”

The Fort Lauderdale Junior Sharks is a wheelchair basketball team for children with disabilities ages 5-16, established in 2017. It was a joint effort of Dynamic Orthopedics, Memorial Adaptive Sports and the Sharks adult wheelchair basketball team. The difference between able bodied basketball and adaptive basketball is that the equipment necessary is not just a basketball but also athletic, sport-specific wheelchairs. The benefits of socialization, exercise and self confidence are rewarding to the child and their family.

Richard suffered a spinal cord injury at 9 months old from a tragic car accident with incomplete paralysis from the neck down. He wanted to play basketball so badly that his family made a plan to move from Brazil to the United States so they could make his dream come true.

For more information about The Fort Lauderdale Junior Sharks and the non-profit’s involvement in the community, contact Melisa Chang at (954) 303-6999 or email at melisa@dynamicorthopedics.com.

Fort Lauderdale Junior Sharks is an non-profit organization that promotes wheelchair basketball for disabled kids in Broward County and surrounding areas. The Fort Lauderdale Junior Sharks’ mission is to create an opportunity for children with physical disabilities to play a team sport at a recreational and competitive level. Dynamic Orthopedics’ provides patients in South Florida custom made orthotics and prosthetic limbs and works to improve the quality of life for every orthotic and prosthetic patient.