Flores Artscape, a Los Angeles landscape design &amp; installation company established in 2004, and owner Rumaldo Flores received Certificates of Recognition from the Los Angeles Mayor for both their community support &amp; exceptional service ratings in a wide range of services from plants to patios. 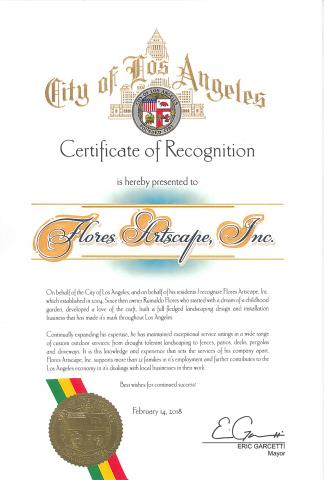 Continually expanding his expertise, Rumaldo has maintained exceptional service ratings in a wide range of custom outdoor services; from drought-tolerant landscaping to fences, patios, decks, pergolas and driveways. It is this knowledge and experience that sets the services of his company apart. Flores Artscape, Inc. supports more than 25 families by its employment and further contributes to the Los Angeles economy in its dealings with local businesses.

This year, besides the Certificate of Recognition, Flores Artscape has also been honored with the Best Business of 2018 award from Three Best Rated, 2018 Best of Houzz Service award & the Super Service Award from Angie’s List. The Super Service Award was won in these four categories: Landscaping, Stone & Gravel, Lawn Irrigation as well as Landscaping—Hardscaping & Pavers.

Flores Artscape has been in business since 2004. But Rumaldo Flores, the owner, has over 25 years’ experience starting with gardening in his teens, and then moving into landscaping design & installation. He’s been interviewed by voyageLA, quoted in the LA Times on drought-tolerant plants & landscaping and featured on a TV program in Mexico on Channel 22 called “Successful Mexicans”. Most recently he was interviewed on Telemundo for a nationally-televised segment called “The Hard Journey from Gardener to Successful Entrepreneur.”

Rumaldo in speaking of Flores Artscape said: “What sets us apart is our communication with our customers and our willingness to help our clients with their needs. It’s the integrity and responsibility we have as a company regarding the delivery of a good service that results in us having satisfied customers. We do that by working as a team. It’s our knowledge and experience that shows in our completed projects. Our goal is to bring landscapes to life.”