Feisty Spirits, a small batch whiskey distillery located in Fort Collins, CO is celebrating its tenth year in business in 2022. It was founded in 2012 by co-founders David Monahan and Jamie Gulden. 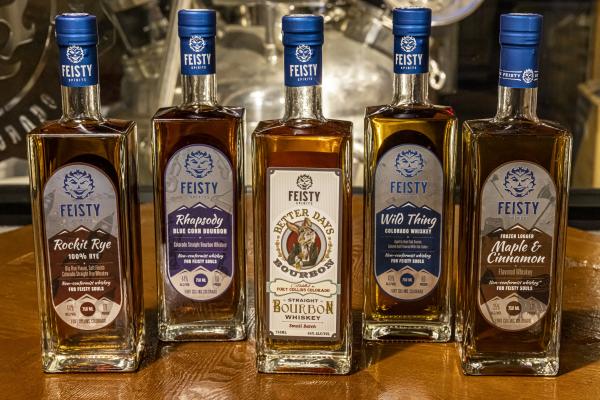 Fort Collins, CO–Feisty Spirits, founded in 2012 by David Monahan and Jamie Gulden, is a small batch whiskey distillery in Fort Collins, Colorado. The distillery specializes in whiskey, nectars, and collaborations with breweries, businesses, and makers.

In 2008, Monahan and Gulden began thinking of ideas for their distillery and in 2012, they opened the doors to what is now a 5,000 square foot facility in northeast Fort Collins, CO. During the course of the past 10 years, Feisty Spirits has created numerous bourbons, rye whiskeys, nectars, and specialty projects through various collaborations.

A tasting room greets visitors and guests are invited to purchase sample trays and do tastings of the Feisty Spirits line. Distillery tours are offered for up to six visitors at a time and scheduled in advance.

One award-winning collaboration done by Feisty Spirits in 2013 was with the indie-rock band Fierce Bad Rabbit and their song, “Better Days,” from their album The Maestro and the Elephant. With striking artwork done by Fort Collins artist Susanna Eve Dominguez, the members of Fierce Bad Rabbit worked with Feisty Spirits to select the flavor profile of Better Days Bourbon. The product continues to be in production and has been celebrated in competitions as well as by countless customers throughout Colorado and beyond.

The distillery is also committed to contributing to local charities as well as national organizations such as Animal House, Easter SEALS, Respite Care, and more.

A selection of Feisty Spirits giftware and logo sportswear is available in the company’s tasting room. Feisty Spirits products can be purchased online, in numerous liquor stores throughout Colorado, and products are available in many Colorado restaurants. For a full list, visit FeistySpirits.com.