Elite Hail Systems has released a free report to assist people in dealing with hail damage on their cars. It is available for download at no charge, at https://elitehailsystems.com/special-offers 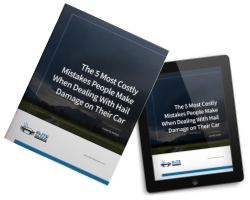 Elite Hail Systems has released a free report titled: “The 5 Most Costly Mistakes People Make When Dealing With Hail Damage on Their Car”. This report aims to arm victims of auto hail damage with the understandings they need in order to make the best decisions for themselves and avoid the devastating financial consequences of innocent mistakes. It also aims to emphasize the importance of dealing with hail damage repair on your car quickly.

The report was written with a specific focus on owners of hail damaged vehicles since the author of the report, believes “people just don’t get hail damage on their vehicles every day… the stakes are high, the players are not always the most credible, and the losses from one mis-step can be enormous; we simply want to level the playing field for those in the game for the first time… and for those who made an innocent but costly mistake in the past. It’s just going to make a huge difference for people who really have no idea what to do other than call their insurance and follow instructions. Sometimes just a little knowledge can save you a ton of money.”

When asked about why they released the report at this time, Robby Searfoss, Co-Founder of Elite Hail Systems said: “I’ve watched people get the short end of the stick for too many years. This is something most people rarely if ever have to deal with, so they’re just not familiar with the ins and outs. I’ve put together a great team, but we just can’t help everyone directly, so we figured the least we could do is put some information out there so people have a fighting chance.”

Elite Hail Systems was incorporated in Colorado in 2018, after decades of helping people with hail damage all over the world; and is an innovative organization quickly becoming a dominant force in an industry that was starving for new levels of service and professionalism. Within the automotive hail damage restoration industry, EHS is best known for taking care of the entire process from A to Z, including their customers’ out-of-pocket costs. The need for auto hail repair in Denver and the surrounding areas of Colorado has become something many people can now have easily, professionally, and promptly taken care of, without the concerns of trying to figure out unfamiliar concepts entirely on their own.

Elite Hail Systems’ unique position within the industry gives it the authority to produce such a report on effectively taking care of auto hail damage because Co-Founder Robby Searfoss is world-renowned as one of the foremost experts in paintless dent repair (PDR). After decades in the industry traveling the world as his expertise was most required, Robby saw a real need and an opportunity to make a significant impact in Colorado, seated right in the middle of the Hail Belt. In an industry that seems to feature another nightmare story in the news each season, Robby brings first-hand knowledge, professionalism, and unique perspectives on helping Coloradans deal with this persistent issue without drawing the short straw every time.

For example, as the report aims to arm victims of auto hail damage with the understandings they need in order to make the best decisions for themselves, it gives valuable information to the reader that will ultimately benefit them by showing how they may be able to have their hail damage repaired perfectly, quickly, without paying a deductible, without having to rent a car, without paying a penny or suffering any loss whatsoever… not even increased insurance premiums. Or sometimes, it might make sense not to repair at all; in which case people will still want some idea of how to look out for their own best interests. This insight simply wouldn’t be possible, or their advice nearly as effective, without the decades spent as a respected leader in the automotive hail damage restoration world so far.

More information on Elite Hail Systems can be found at https://elitehailsystems.com

The Report “The 5 Most Costly Mistakes People Make When Dealing With Hail Damage on Their Car” can be downloaded at https://elitehailsystems.com/special-offers