Fish populations must remain in balance for a productive fishery. Flooding may upset that balance. Electrofishing is a tool to help restore balanced fish populations. 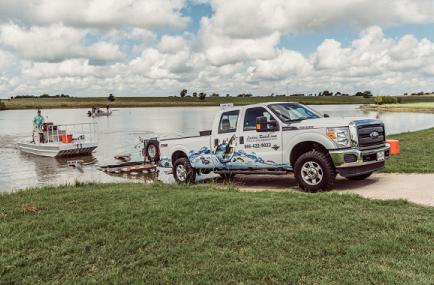 This year the floods in various parts of the country have created some chaos for privately managed lakes.

For the southern states, the wet weather may not be over. The National Oceanic and Atmospheric Administration (NOAA) is expecting a 70% chance of El Niño conditions which may mean a wetter winter for the South. In Texas, there is expected cooler temperatures and above normal rainfall. There is the possibility of increased storms.

When there are flood like conditions, unmanaged lakes and creeks can overflow into managed lakes. This can lead to an introduction of trash fish species and unwanted vegetation.

Lake water is naturally stratified and a rapid runoff of water in a major storm system can create turnover. This stresses the fish, and can cause a fish kill. Besides the danger of foreign and invasive species entering the water, fish kills can unbalance the current fish population.

After a flood, an electrofishing analysis can determine whether foreign species have entered a pond or lake and can determine the after-storm population density.

Electrofishing is a scientific method whereby the fish are stunned briefly, causing no long term negative effect to the fish population. An electrofishing survey determines abundance, population density and other characteristics of the fish population. Each fish is weighed, measured and released unharmed. They return to their normal state in a matter of a few moments. Electrofishing is an excellent tool for correcting an out-of-balance body of water. Stunted fish or unwanted species can be easily and quickly removed.

Lochow Ranch Pond and Lake Management uses a top-of-the-line electrofishing boat to accurately and effectively assess fish populations so lake and pond owners can take action to make their respective body of water all it can be. Serving Texas, Oklahoma, Arkansas and Louisiana, their expert biologists, technicians, and other professionals can meet goals of putting ecosystems back in order.