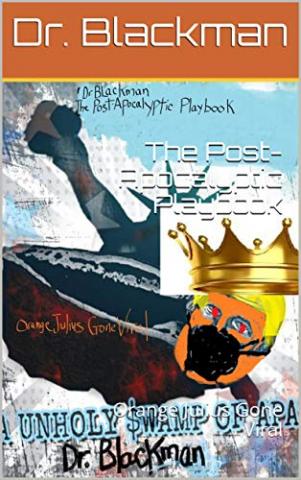 Quoting the late Robin Williams, “People say satire is dead. It’s not dead; it’s alive and living in the White House.” This piece discusses various political and social events in a way that is fun and engaging, showcasing the author’s grasp of the satire genre. By creating an alternate reality style version of the real world within the book, the book could be the perfect way to analyse issues by stretching real issues to the extreme and fictionalising them.

In The Post-Apocalyptic Playbook, Dr. Blackman creates a fictionalized world in which Spamerica, formerly known as Manhattan, has displaced the indigenous population of Manhattoes to be relocated from their homes to the shantytown of Albya. One event in the book involves fictional character El Presidente “Crooked Don” Don T-Rump building walls between its neighbors, Mexiraq and Canadastan. Other events include corporate battles, corrupt leadership and diplomatic relations.

Readers from any background will enjoy Dr. Blackman’s vivid language and cutting sense of humor. Fans of The Daily Show with Trevor Noah are sure to love this enthralling book. Dr. Blackman isn’t afraid to tackle difficult topics and challenge the audience’s preconceived notions about the state of modern society. The Post-Apocalyptic Playbook will resonate with open-minded individuals who reject the status quo.

“The blend of satire and a fictional post-apocalyptic world with our real world politics was powerful to read, and the long form poetry style of writing was perfect to see play out throughout this book.”

“[The Post Apocalyptic Playbook] is as entertaining as it is thought-provoking.”

Dr. Robert Blackman is an author and practicing holistic doctor. He can be found online at https://orangejuliusgoneviral.com or https://doctorblackman.com. The Post-Apocalyptic Playbook: Orange Julius Gone Viral is available for purchase on Amazon.com.