Dionne Warwick To Be Honored In Palm Springs Benefiting Nonprofit

Dionne Warwick will be feted Tues, Dec 7 at 7 p.m. when Oscar’s Palm Springs hosts “An Intimate Evening with Dionne Warwick,” a night of music and memories followed by her induction into the city’s walk of fame 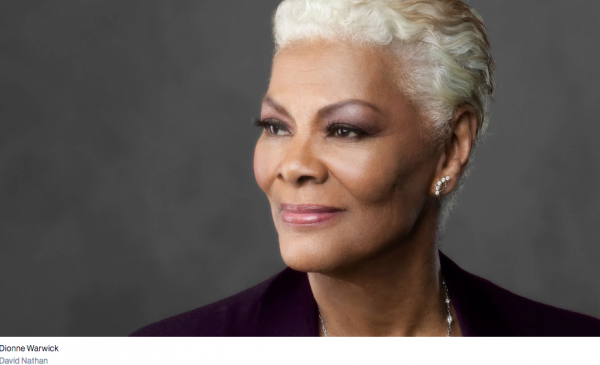 Remember “Priscilla: Queen of the Desert?” Well there’s someone who’s about to take away that title as music legend Dionne Warwick, a six-time Grammy winner who has sold more than 100 million records, becomes the toast of Palm Springs, CA…the new queen of the desert. The hitmaker whose career has spanned 7 decades will be feted starting Tues, Dec 7 at 7 p.m. when Oscar’s Palm Springs hosts “An Intimate Evening with Dionne Warwick,” a night of music and memories. Then on December 8, she will be inducted into Palm Springs’ Walk of Fame with a star of her own. Tickets to “An Intimate Evening with Dionne Warwick” are $150 and may be obtained by visiting www.oscarspalmsprings.com or calling (760) 325-1188.

Proceeds from the event will be donated to Caterina’s Club, a Southern California nonprofit that feeds 5,000 children each night, finds permanent homes for families in need and trains at-risk youth for careers in the hospitality field.

“Ms. Warwick is a legend pure and simple and we are more than honored that she has accepted our invitation to be guest of honor at Oscar’s Palm Springs,” says Dan Gore, owner of the nightlife venue/restaurant/bar best known for its “An Intimate Evening With…” series and Palm Springs chair of Caterina’s Club. “The evening will be similar to the Kennedy Center Honors where well-known performers will honor her by covering many of her well-known hits and share stories of her life. We’re particularly thrilled that the evening will be dedicated to underprivileged families living right here in Southern California.”

Warwick started her career in 1961 after being discovered by the legendary songwriting team, Burt Bacharach and Hal David, and the team went on to record 30 hit singles and 20 best-selling albums during their first decade together. Their first record, “Don’t Make Me Over,” was followed by “Walk on By,” “Anyone Who Had a Heart,” “Message to Michael,” “Promises Promises,” “A House is Not a Home,” “Alfie,” “Say a Little Prayer,” “This Girl’s in Love With You,” “I’ll Never Fall in Love Again” and “Reach Out For Me,” among others.

She received her first Grammy in 1968 for her mega-hit, “Do You Know the Way to San Jose?,” becoming the first African-American solo female artist of her generation to win the prestigious award for Best Contemporary Female Vocalist Performance. She kicked off the ‘70s by earning her second Grammy for the best-selling album, “I’ll Never Fall In Love Again,” and later topped the charts with The Spinners on their hit, “Then Came You.” In the ‘70s and ‘80s, she made music with Barry Manilow (“Deja Vu”), The Bee Gees (“Heartbreaker”) and others as she continued racking up more and more Platinum-selling albums. In 1985, she reunited with composer Bacharach and longtime friends Gladys Knight, Elton John and Stevie Wonder to record “That’s What Friends Are For,” an international #1 record benefiting the AIDS charity, AMFAR.

Throughout the 1980′s and 1990′s, she collaborated with many of her musical peers including Johnny Mathis, Smokey Robinson, Luther Vandross, Jeffrey Osborne, Kashif and Stevie Wonder while also hosting the hit television music show, “Solid Gold.”

In 2006, she recorded an album of duets, “My Friends & Me,” followed by a critically acclaimed Gospel album, “Why We Sing,” and a jazz album, ”Only Trust Your Heart,” a collection of standards celebrating the music of legendary composer Sammy Cahn. In 2013, she released “Now” produced by Phil Ramone, which was nominated for Traditional Pop Vocal Album at the 2014 Grammy Awards. Most recently, she released a much anticipated star-studded duets album titled “Feels So Good,” featuring collaborations with some of today’s greatest artists including Alicia Keys, Jamie Foxx, Ne-Yo and others.

Warwick is also a best-selling author and supports countless nonprofits.