Aliyyah Koloc turns her second overall desert start into a victory in her category and a strong 5th place overall. Yasmeen Koloc finished fourth in her category after technical issues. Aliyyah leads the FIA Middle East Cup for Cross-Country Bajas, Yasmeen is fourth. 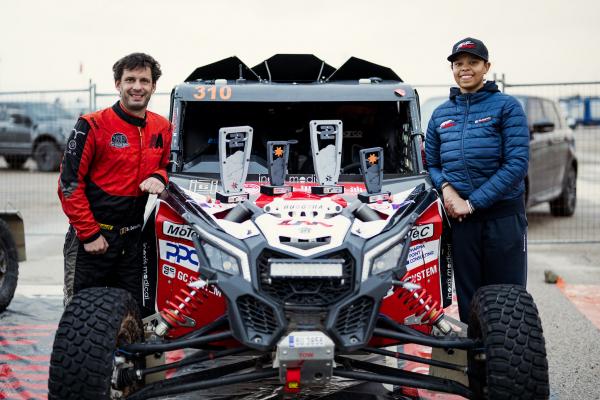 The prestigious rally took place in the perfect setting of Wadi Rum, a rocky valley in the South of Jordan. On Day 1, Aliyyah was able to finsih the day with a class lead, despite a puncture. During the second leg of the day, she even led the overall standings, only to be beaten eventually by Yazeed Al-Rajhi, the T1 category leader and third in this year’s Dakar Rally. Yasmeen struggled with technical issues from the start, with the opening stage ending for her at kilometre nine.

Day 2 proved to be even more difficult for the sisters as Aliyyah and Yasmeen had to navigate through a variety of different terrains, from mud and dunes to rocky climbs in the mountains. Temperatures of only 10 degrees Celsius and a strong rain storm made it even trickier for the two girls who were only competing in their second cross country rally overall.

Yasmeen, who had started the day in last position due to the technical issues the day before, experienced more technical issues with the wiring getting wet in the strong rain. In the end, Yasmeen put in a heroic performance and finished fourth in her category despite these adverse conditions.

Aliyyah brought home first place in the FIA Middle East Cup and is leading the championship. Together with her co-driver Sébastien Delaunay they also came second amongst all T3 prototypes, just 19 minutes behind the winner Saleh Al Saif, and finished fifth in the overall standings.

Yasmeen and her co-driver Stéphane Duple finished 4th in the FIA Middle East Cup and came third in the T3 category thanks to their fighting spirit.

What they said after the rally:

Aliyyah Koloc: “Of course I’m happy, winning is nice. I worked with a great navigator who played a big part in my result. I really enjoyed the second day which was very fast.”

Yasmeen Koloc: “After the first day it was very hard, but I heard from all sides that I should just get on with it. I did but it was the hardest day of my career so far. In the end it turned out great, and I had a great co-driver with Stéphane, so I’m happy.”

Sébastien Delauney: “From my position as a full-time navigator, I can say that Aliayyh drives literally faultlessly, and she handled the rocky parts particuarly well. I am very happy.”

Stéphane Duple: “Yasmeen showed an incredible amount of mental resilience which is crucial in rallying. When suddenly almost everything stopped working, she just kept going and going. She has a great future ahead.”

The second round of the FIA Middle East Cross-Country Bajas takes place in a month’s time, on 24-26 March in Qatar.