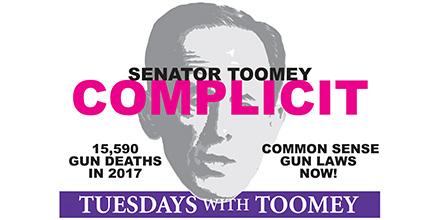 Florida’s Parkland High School is one in a string incidents of gun violence in U.S. schools. Though Senator Toomey ran as a gun sense candidate and received endorsements from gun reform organizations, including Everytown and Americans for Responsible Solutions, he has not kept his campaign promises to work towards commonsense gun legislation. Senator Toomey recently voted for HJ40, which loosens restrictions for severely mentally ill patients to buy firearms, and is a co-sponsor of the Constitutional Concealed Carry Reciprocity Act of 2017, which would allow concealed transport of firearms across state lines and force states to honor concealed carry permits issued elsewhere. This is unacceptable.

Pennsylvanians will use this event as a launching point to demand, through every available legal means, that Senator Toomey keep his constituents safe and stand by his campaign promises by joining Senator Casey in cosigning onto Senator Feinstein’s Assault Weapons Ban (S. 2095), cosigning onto Senator Feinstein’s Automatic Gun Fire Prevention Act (S. 1916), and cosigning on Senator Murphy’s Background Check Expansion Act (S. 2009). In addition, constituents insist that Senator Toomey take a proactive stance in furthering the passage of the Manchin-Toomey amendment and further that Senator Toomey revoke his cosponsorship of the Constitutional Concealed Carry Reciprocity Act of 2017 and vote against this bill.