Concrete By Design delivers transformation to 1970s home in Atlanta

Concrete By Design transformed the look of an outdated 1970's home flooring by taking several important steps. The outcome of the flooring changed the perception of an old home to a new diverse look for the new homeowners. 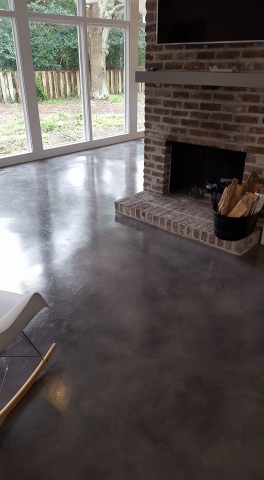 Concrete by Design was recently approached by a couple who purchased a 1970s home in one of the more established and long standing neighborhoods in Fayette County. A couple was looking to bring new life to the interior of their home and chose to do a total renovation. The floors they chose throughout the interior would be a resurfaced concrete, gray in color.

Concrete by Design was eager to help this couple so they presented sample boards illustrating the process and moved forward executing the project.

Several steps were involved to bring this project to fruition:

First, a dustless grinding system was employed to remove all of the carpet glue and other additional surface remnants. Using a dustless system is critical in the business of concrete because of the risk involved with breathing in silica dust.

Following this, any cracks that existed in the concrete were repaired using an incredibly strong epoxy product called Road Mender with a sand broadcast to increase strength in the repair. Once all the cracks were repaired, the surface was grinded again, cleaned thoroughly, and vacuumed to prepare it for the application of products.

Next, a lifetime primer from Versatile Building Products was applied to the surface in order to create a bond between the existing surface and the resurfacing material that was to be used.

Stain was applied at a 3:1 ratio. When the homeowners approved the colors, the team began the final step of applying 2 coats of epoxy sealer to complete the floor.

This project took a total of 1 week to complete and was a success for the homeowner and Concrete By Design. The process used here can also be used in commercial settings such as: retail spaces, restaurants, hair salons, office spaces, warehouses, etc. and in certain industrial settings.

Concrete by Design, LLC has been providing concrete staining services to residential and commercial clients all over the Atlanta area for many years. From staining concrete in Newnan, Fayetteville, Peachtree City, and other areas outside the perimeter of Atlanta to interior concrete floors for residences and business within the perimeter, they strive to offer the entire Atlanta metro area and surrounding cities their quality work.