A wheel assembly flew off a semi-truck while traveling on I-40 in the early hours of October 29, 2018, killing one woman and damaging several other vehicles on the highway. 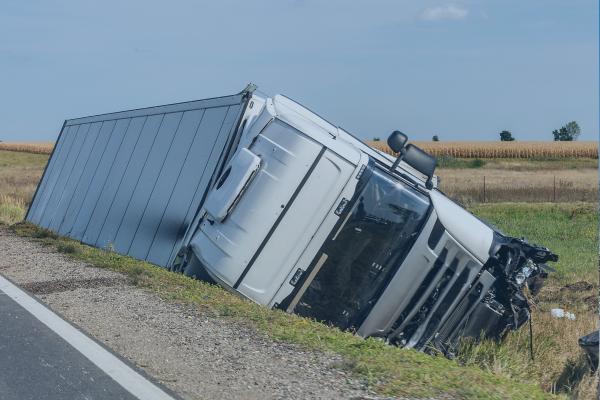 In the early morning hours of October 29, 2018, a chain reaction of motor vehicle accidents occurred on Interstate 40 in Oklahoma City. The reaction started when a wheel assembly came off a semi-truck and struck a Jeep, a pickup truck, and a BMW, before falling off of I-40 onto MacArthur Boulevard and hitting another tractor-trailer.

According to the Oklahoma Highway Patrol (OHP) Kasey Jill Morse, a 33-year-old woman who was riding in the Jeep, died immediately from the impact.

Shelby Lynne Jackson, a 22-year-old woman who was driving the Jeep, told KOCO-TV that the semi-truck’s tire “just kind of came out of nowhere” and that she had no time “to swerve or brake or do anything.” The impact forced Jackson’s Jeep to roll over and pinned her inside the vehicle. Jackson said a group of five men “broke the windows of her Jeep and cut her seat belt so she could get out to safety.”

The driver of the semi-truck did not stop at the accident scene and kept driving, apparently unaware anything had happened. OHP officers eventually located the truck and its driver at a repair shop in Gainesville, Texas, just across the Oklahoma border. According to a report in The Oklahoman, the driver “didn’t realize the wheel assembly had come off the rig and that he only discovered it during a routine inspection of the vehicle, which he performs every two hours.”

OHP investigators said there was “no visible evidence” of damage when the semi-truck left Oklahoma City on Monday morning before the driver entered I-40. Officials also told the press they were now looking at whether someone had tampered with the wheel assembly of if there was some sort of “product failure” that could have explained why it came off the back of the semi-truck.

According to Tulsa personal injury attorney Charles Bryan Alred, “Commercial truck accidents are often the most difficult cases when it comes to sorting out legal liability. A semi-truck passes through many hands. There’s the driver, the owner of the vehicle, the people responsible for maintenance, the companies that manufacture the parts, and even the businesses that provide the trailers and cargo. This is why it is so critical for law enforcement to conduct a thorough investigation into the causes of any truck accident, especially one where lives have been lost.”