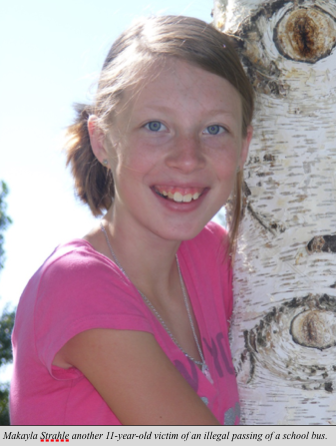 U.S. Senator Deb Fischer (R-NE), sponsor of the resolution, expressed gratitude for everyone that is helping keep our students safe. “I have been proud to sponsor a bipartisan resolution designating School Bus Safety Month for the past few years. With students in Nebraska and across the country back in the classroom, it is so important that they stay safe traveling to and from their schools. As the chairman of the Transportation and Safety Subcommittee, I’m thankful for all of our hardworking school bus drivers and for the Child Safety Network’s 30 years of work to protect our children,” stated Fischer. The Senate Resolution was co-sponsored by Senators Tammy Duckworth (D-IL) and Elizabeth Warren (D-MA).

CSN founder Ward Leber commended the latest unanimous vote but emphasized that the effort is not about just one month or one week in October where the nation celebrates School Bus Safety Week. With over 450,000 school buses and nearly 26 million students riding buses each school day, the American school bus system is the largest single-purpose transportation network in the nation.

Leber argues that such a large system deserves a dramatically higher level of focus on safety and security. “We must be vigilant year-round because there is much more that can be done to keep our students safe.” Leber continued, “CSN is committed to a multi-faceted program that offers advanced school bus driver training, screening, recruiting; and helps fund enhanced bus technology to provide new tools to help parents keep their kids safe.”

As the first line of defense for kids that ride the bus, CSN believes that all school bus operators should receive advanced driver training to reduce accidents, injuries and fatalities. CSN is working to provide school bus operators with its endorsed training courses and training by the Transportation Security Administration (TSA); so school buses become “hard targets” for those who would wish to weaponize the vehicles or endanger students.

CSN is also advocating for heavier investment in the school bus drivers and the fleet itself. CSN has proposed that all school buses become equipped with advanced GPS, video monitoring and route guidance systems; which are often cost prohibitive for local districts despite their importance. Because budgets are tight, CSN works with corporate sponsors to deploy this technology in school buses that otherwise would not receive it. Additionally, a number of CSN-inspired legislative efforts are underway to allow for state and federal funding to provide mission critical safety and security resources for students that ride the bus. Leber added, “All of CSN’s legislative agendas are bipartisan. There is no ‘side of an aisle’ when the issue is protecting our children.”

In conjunction with this new technology, Leber argues that parents today need tools to ensure children are safe on the bus and that the bus makes the route on time; or notifies parents in real time so that they are assured of their students location and safety.

To help accomplish this task, CSN has been developing a revolutionary new app called “Safer Together”, that provides this real-time, GPS-based information along with news and information requested by parents to help them raise safer healthier children. CSN is working to deploy the Safer Together app in districts across the nation with its corporate partners. Colorado will likely be the first state to pilot these improvements.

While there remains much to be done, Leber makes clear that CSN does not want to alarm parents, but to reassure them that we are doing all things possible with our partners to make school buses even safer. “Take heart parents, you want your kids on the school bus. In fact, kids are 70 times less likely to be killed, abducted or injured on the way to or from school if they ride the bus as opposed to walking, riding a bike or being taken by another motorist,” stated Leber.

To ensure that efforts to improve school bus safety are grounded in empirical analysis, CSN has conducted critical research, such as studying why 13 million people do not stop for school buses each year in accordance with the law. CSN plans to collaborate once again with multiple universities to study driver behavior and offer evidence-based solutions to reduce the number of people who break the law, illegally and dangerously passing a school bus.

This topic could not be more personal to anyone other than CSN Senior Advisor Detective, Dan Sperry, and his family. Sperry’s 11-year-old daughter Makayla was struck and killed by a driver illegally passing a school bus. According to Detective Sperry, “Five days before Christmas in 2011, a driver was traveling in the opposite direction of the stopped school bus and struck and killed my daughter as she crossed the street. At the time, I was a Patrol Officer working to protect my community; but I was powerless against that driver, who like millions more, have no idea or don’t care that they are risking a child’s life every time they break the law. I’ve since devoted my life to working with CSN and schools to improve student safety.”

Founded in 1989, Child Safety Network’s (CSN) mission is to protect children from abuse, abduction, injury and exploitation. CSN is a national leader in delivering free resources and programs designed to keep kids safe. CSN has been endorsed by over 500 U.S. representatives including the current and past five presidential administrations. Equally important to CSN’s mission are its efforts to collaborate with community organizations and businesses that care about helping parents raise safer, healthier children. CSN’s work in youth violence prevention and intervention is evidenced based; and the most effective on record.