CCHR is urging officials not to adopt mental health screening in the hope that it could reduce violence stating that such screening could worsen the issue. 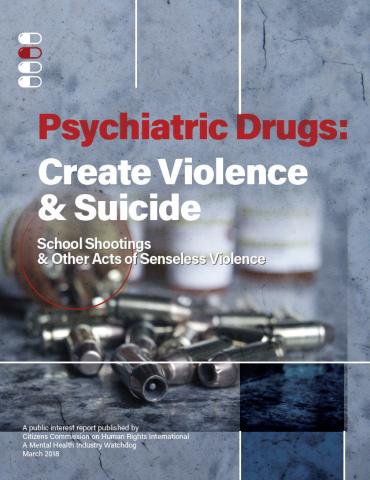 The Citizens Commission on Human Rights(CCHR) is urging state authorities and educators not to adopt mental health screening in schools in the false hope that it could prevent acts of violence. Such screening could exacerbate the issue if it leads to children being prescribed psychotropic drugs based on the fact that since the introduction of antipsychotics in 1955 and the newer antidepressants, like Prozac, in 1987, both groups of drugs have been linked to violent effects in a percentage of those taking them.[1] Independent of CCHR, Dr. David Healy, an international expert in psychopharmacology, estimated that 90 percent of school shootings, over more than a decade leading up to 2012, were linked to SSRI antidepressants (e.g., fluoxetine, paroxetine, sertraline, etc.).[2] Dr. Healy further warned: “Violence and other potentially criminal behavior caused by prescription drugs are medicine’s best-kept secret.”[3]

In a comprehensive report released earlier this year, CCHR documented 36 school shootings and school-related acts of violence that date back to 1988 with all of the crimes committed by people either taking or withdrawing from psychiatric drugs. The end result was that 172 people were wounded and 80 were killed.

Cited in the report is Harvard Medical school psychiatrist Joseph Glenmullen who said: “The irritability and impulsivity” from antidepressants, for example, “can make people suicidal or homicidal.” Also cited is Patrick D. Hahn, an affiliate professor of Biology at Loyola University in Maryland who confirms: “The link between antidepressants and violence, including suicide and homicide, is well established.”[4][5]

The FDA’s Adverse Event Reporting System has at least 1,530 cases of homicide/homicidal ideation reported to it as linked to psychiatric drugs. The FDA admits that only 1-10 percent of drug side effects are reported to its MedWatch program. Taking a moderate five percent, then, the potential number of reported incidents could be as high as 30,620. A percentage of those could be driven to commit violent crimes.

“Officials need investigate the mounting evidence that psychiatric treatment and its failure has had something to do with a large percentage of the acts of violence occurring in our communities,” said the president of the Florida chapter of CCHR, Diane Stein.

In the aftermath of recent school shootings, training in Mental Health First Aide and increased mental health screening of students has been a widely promoted response yet these actions simply lead to a significant number of individuals being labeled and drugged with the very same psychotropics linked to violence in the first place.

Following the shooting tragedy at Santa Fe High School in Texas, leaving ten dead, Texas Gov. Greg Abbott hosted roundtable discussions in the hopes of developing solutions to improve school safety statewide resulting in the Texas Criminal Justice Division of the governor’s office providing $565,000 to the Telemedicine Wellness, Intervention, Triage, and Referral (TWITR) Project at the Texas Tech University Health Sciences Center. The purpose of the TWITR project was to identify junior high and high school students most at risk for committing violence in schools and intervene before it happens.[7] Through the program, at-risk students at ten West Texas school districts who showed aggressive or harmful behavior were identified and then screened for potential psychiatric services.

Since its launch, more than 400 students have been referred to the program, with 200 getting screened for alleged anxiety, depression, loneliness, isolation and whether they’re prone to violence or violent thoughts.[8] This is an astounding figure, CCHR says, considering that psychiatrists admit they have no means of predicting violence. In an article in the Rutgers Law Review, Henry Steadman and Joseph Cocozza also concluded, “There is no empirical evidence to support the position that psychiatrists have any special expertise in accurately predicting dangerousness.”[9]

Karen Effrem, MD, a pediatrician and president of Education Liberty Watch, points out a number of problems with the project. “While federal, state, and local officials are trying to improve student safety in the wake of the tragic Parkland, FL, school shooting [and now Santa Fe High School shooting], the heightened concern over student mental health has greatly increased efforts to screen students for mental health issues.”[10]

Dr. Effrem stated, “There are so many problems with the foundation of these programs, it is difficult to know where to begin. Let’s start with the admitted subjectivity of mental illness diagnostic criteria. As the latest version of the American Psychiatric Association’s (APA) diagnostic handbook was about to be published, Dr. Dilip Jeste, APA’s president at the time, admitted: ‘At present, most psychiatric disorders lack validated diagnostic biomarkers, and although considerable advances are being made in the arena of neurobiology, psychiatric diagnoses are still mostly based on clinician assessment.'” In other words, as Thomas Insel, former Director of the National Institute of Mental Health said, psychiatric “diagnoses are based on a consensus [vote] about clusters of clinical symptoms, not any objective laboratory measure.”[11]

CCHR warns that mental health screening and the inevitable resulting increased psychotropic drug prescriptions will not only escalate state budgets for no equitable or positive return but more importantly, will put more students, teachers and the community at risk of increased violence. Individuals concerned with the link between violence and psychiatric drugs are encouraged to send a copy of the report, Psychiatric Drugs Create Violence & Suicide to their legislative representative calling for an investigation.