CCHR has been working for years to create positive change in how the mental health law is applied to minors in order to protect children and parental rights. 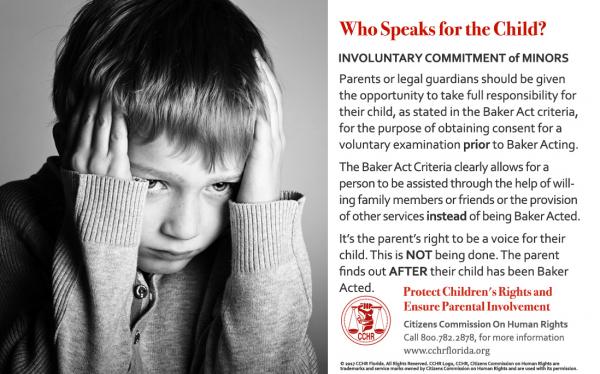 The Florida chapter of the international mental health watchdog, Citizens Commission on Human Rights (CCHR), has been working for years to create positive change in how the mental health law is applied to children and teens in order to protect children and parental rights.

The mental health law in Florida is commonly known as the Baker Act and under this law there were more than 199,000 involuntary psychiatric examinations last year alone according to the Baker Act Reporting Center with those 17 and under accounting for more than 32,000 of these initiations. [1] And while the Baker Act is seen by some as the only solution to help those in crisis CCHR states that the abusive use of this law does more harm than good.

Having educated tens of thousands of Floridians on the mental health law, CCHR has helped to make changes to the Baker Act specifically for the purpose of protecting children. These changes have included changing how long a Baker Act Receiving Facility has to initiate an examination on a child reducing it from 72 hours to 12 hours. Stating that the trauma experienced by a child, especially a very young child, during a Baker Act needs to be taken into consideration by those who have the authority to send children for an involuntary psychiatric examination, CCHR is currently asking Florida lawmakers to amend the law to clearly spell out the procedure for Baker Acting a minor.

“All too often the Baker Act is used incorrectly to address the behavior of a child and this abuse of the law comes with long term ramifications for that child and the family,” stated Diane Stein, President CCHR Florida. “Being escorted out of school by law enforcement is a stigma the child carries for life.”

Currently the law is being executed in such a way that parents and legal guardians are being left out of the process only finding out that their child has been Baker Acted after initiation and usually after the child has already been transported by law enforcement to a psychiatric facility. CCHR believes that this is a violation of the rights of the child and the parent a belief that is shared by Sheriffs, Police Chiefs and even School Districts across Florida.

Since 2017, CCHR has been working to educate those granted the power to initiate a Baker Act on why a parent or guardian should be brought into the process before initiation resulting in over one hundred adoptions of policy changes, mostly within law enforcement, to contact the parents of a child before initiating a Baker Act.

“This policy adoption is helping to protect children, parental rights and is reducing the number of illegal Baker Acts where a child does not meet the criteria to be sent for involuntary psychiatric examination,” said Ms. Stein.

With it being disclosed during a meeting of the Baker Act Task Force in 2017 that 30 percent of the minor Baker Acts in Pinellas County did not meet the criteria and that facilities were “risk-averse” and admitting children that might not fully meet the criteria, adoption of policy to bring parents and guardians into the process before a child is put through the trauma of a Baker Act only makes sense. [2] Those interested in learning more about CCHR’s campaign to protect children from abusive Baker Acting are encouraged to call 800-782-2878.